Kore.ai’s Smart Bots allow enterprises to build bots centrally and allow various teams within the enterprise to reuse and extend the bot configurations to suit their requirements. Smart Bots expedite the bot building process by allowing new bots to inherit the configuration and tasks of pre-defined bots.

For example, a bank with operations in various countries and jurisdictions can use Smart Bots to define global standards and allow regional units to supplement with any local regulatory or customer needs. Or a utility bot could be built to fulfill common enterprise needs like IT Help Desk, Leave Management etc. and individual departments could inherit this utility Smart bot and supplement department specific tasks. Like, the Marketing & Sales team could subscribe to the utility Smart bot and add tasks related to prospecting by integrating with Salesforce, Hubspot etc.

Smart Bots functionality is built based on the concepts of Object Inheritance Model. Developers of a Smart Bot can build the bot definition along with tasks and knowledge queries and publish it like any other standard bot. Additionally, any parameters that need to be customized locally can be exposed as variables. Interested teams or developers within the enterprise can build child bots by inheriting the bot definition from the Smart bot. Any update on the parent can automatically be passed onto all inheriting child bots. Additionally, developers may extend the child bot with additional tasks and knowledge queries. These extensions will not affect the parent bot or the other inheriting child bots. The developer of the child bot will also have the option to selectively override the inheritance if required.

Example: Banking Bot – Multi-jurisdiction Operations
Banks with operations in various countries or jurisdictions can use Smart Bots to define global standards and allow regional units to supplement with any local needs of the regulators and/or customers. 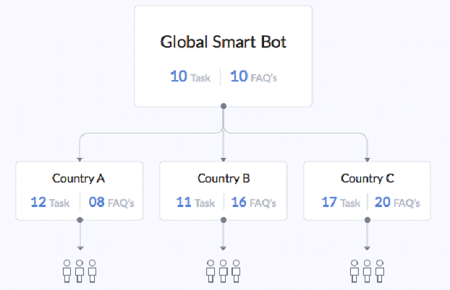 Few of the above steps need special mention in the context of Smart Bots and are discussed in the next few sections.

Some Bot Settings that need to be configured specially for a Smart Bot are mentioned in this section.

Bot Variables allow you to define variables centrally and reuse them across bot definition. For example, during bot building, developers typically use staging endpoints for testing. You can set those endpoints as variables. When you export or publish the bot, you can replace such variable values with the production endpoints. Defining Bot Variables remains similar between Standard and Smart Bots. Refer here to learn how to configure the Bot Variables.

Global Variables of Smart Bots will have an additional option to define the visibility or usage of variables during inheritance:

Configuration settings required to inherit the smart bot can be set from the Smart Bot Settings tab in the Bot Settings. These settings serve as an aid in the discovery, preview, and installation of the Smart Bot.

Bot developers can view and install a Smart Bot published within their account.
NOTE: In order for the developers to see and inherit your smart bot, you need to publish it. Refer here for details on Publishing the Bot.

Steps to  Inherit a Smart Bot

The child bots can use the Smart Bot as is or extend the inherited functionality by adding tasks and knowledge queries, as well as localize relevant parameters using variables. The Inheritance Scenarios section below provides the list of elements that get inherited by the child bot and the conditions under which the inheritance continues or gets overridden.

In a child bot, the inheritance applies in the following ways:

Disable Inheritance: Inheritance can be disabled at the bot level, from the Advanced Settings of the child bot using the Smart Bot Inheritance option. This option will permanently delink the child bot from the parent smart bot and should be used with caution.

The following sections show the list of bot elements with no, one-time and continuous inheritance and the actions that unlock the inheritance.

Bot Elements which are not Inherited

Note: While the Entity Synonyms of existing bot tasks have one-time inheritance, the NLP entries of any new task created in the parent bot will get inherited into the child bots.