Kore.ai records and presents all the information as part of the Bot Analyze section. Developers can gain in-depth insights into their bot’s performance at identifying and executing tasks. It lets you view necessary information for user utterances that matched and didn’t match with intents.

Note: Conversation Sessions involving one or more user messages are alone considered in deriving the metrics. Conversations Sessions that contain only the bot messages, for example a bot that triggers one or more messages from onConnect() event, are not considered. 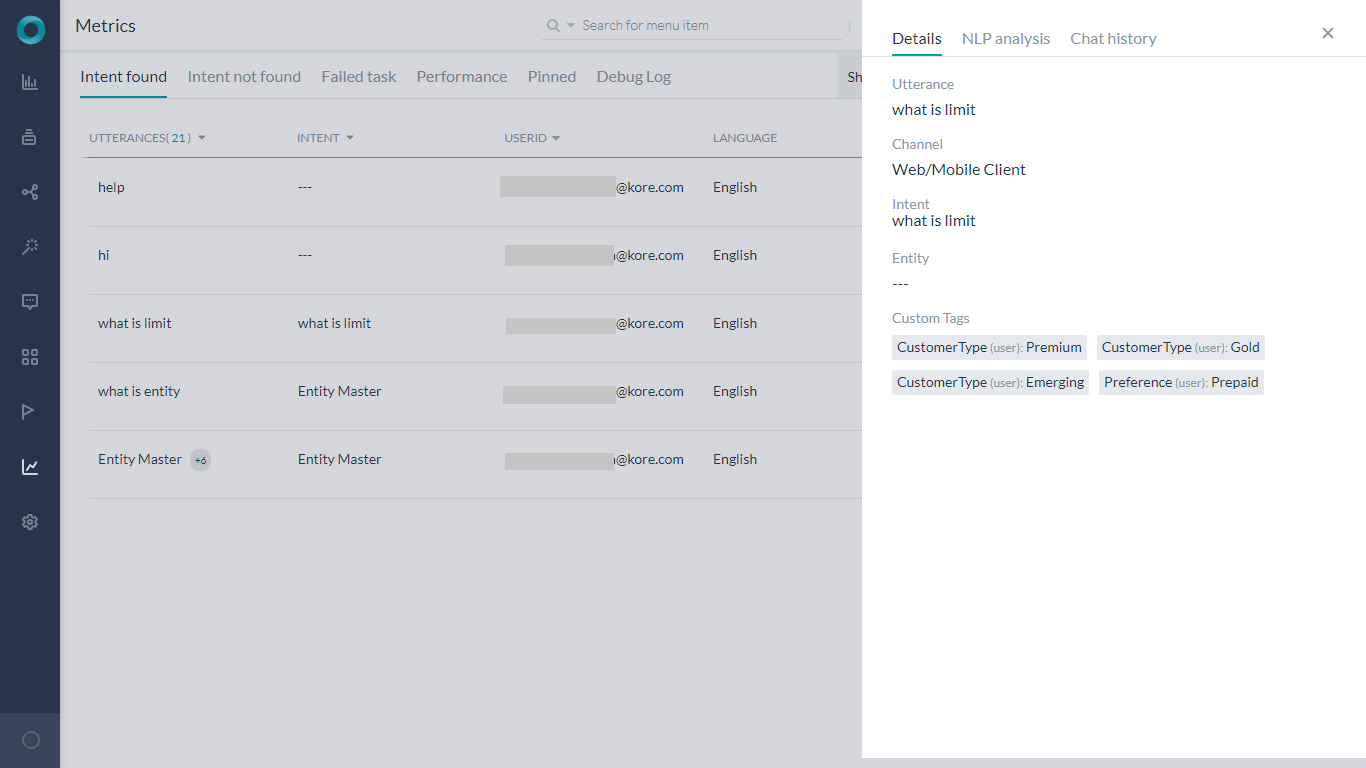 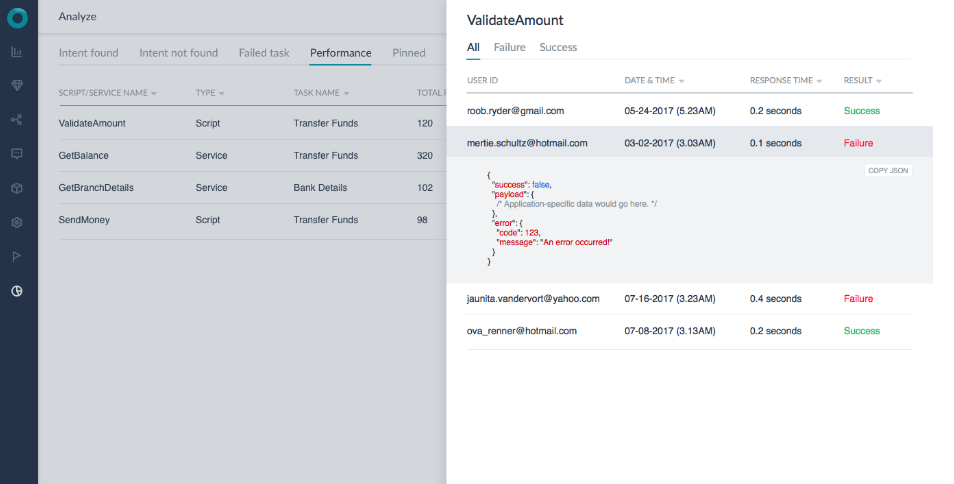 To open the Metrics page, hover over the side navigation panel and click Analyze -> Metrics.

Post ver 7.1, to facilitate easier review of the Bot’s performance, the end-user utterances are grouped based on similarity.

You can filter the information on the Metrics page using the following criteria. 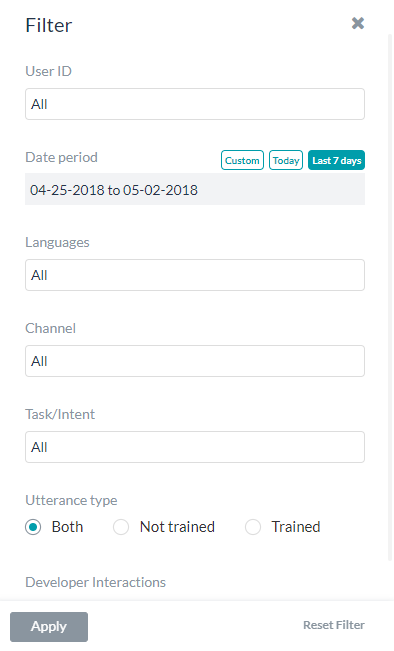 The primary details, filter criteria, and the advanced details for both the Intent Found and Intent Not Found are similar, with minor differences. You can also train the bot for any utterances directly from these tabs.

You can train an intent from both the Intent Found and Intent Not Found tabs. To do so, hover over a row in any of these tabs, and click the Train icon. It opens the Test & Train page from where you can train the bot. For more information, read Testing and Training a Bot.

The Failed Tasks tab shows the following details related to the task that was identified but failed to execute for any reason:

For all the user utterances listed under the Intent found, Intent not found, and Failed Task tabs, you can open advanced details related to the user session with the following sub-tabs:

NLP Analysis and Chat History will be available only for the chat logs created after v6.1.0

The Performance tab shows the following information related to the backend performance of the bot: 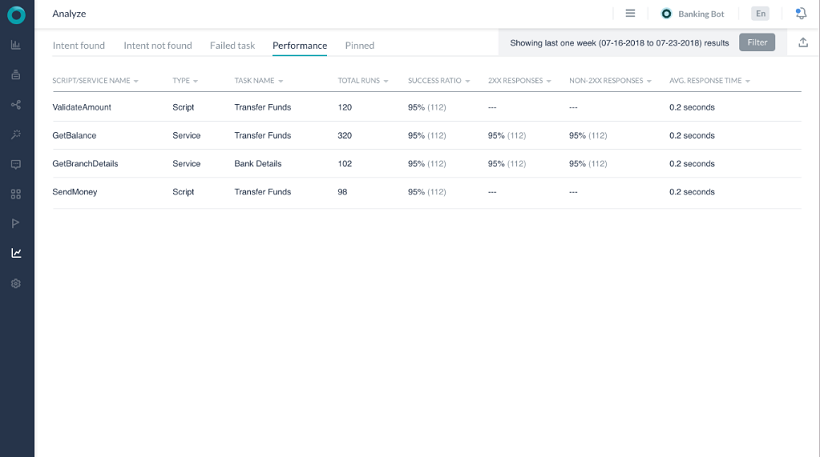 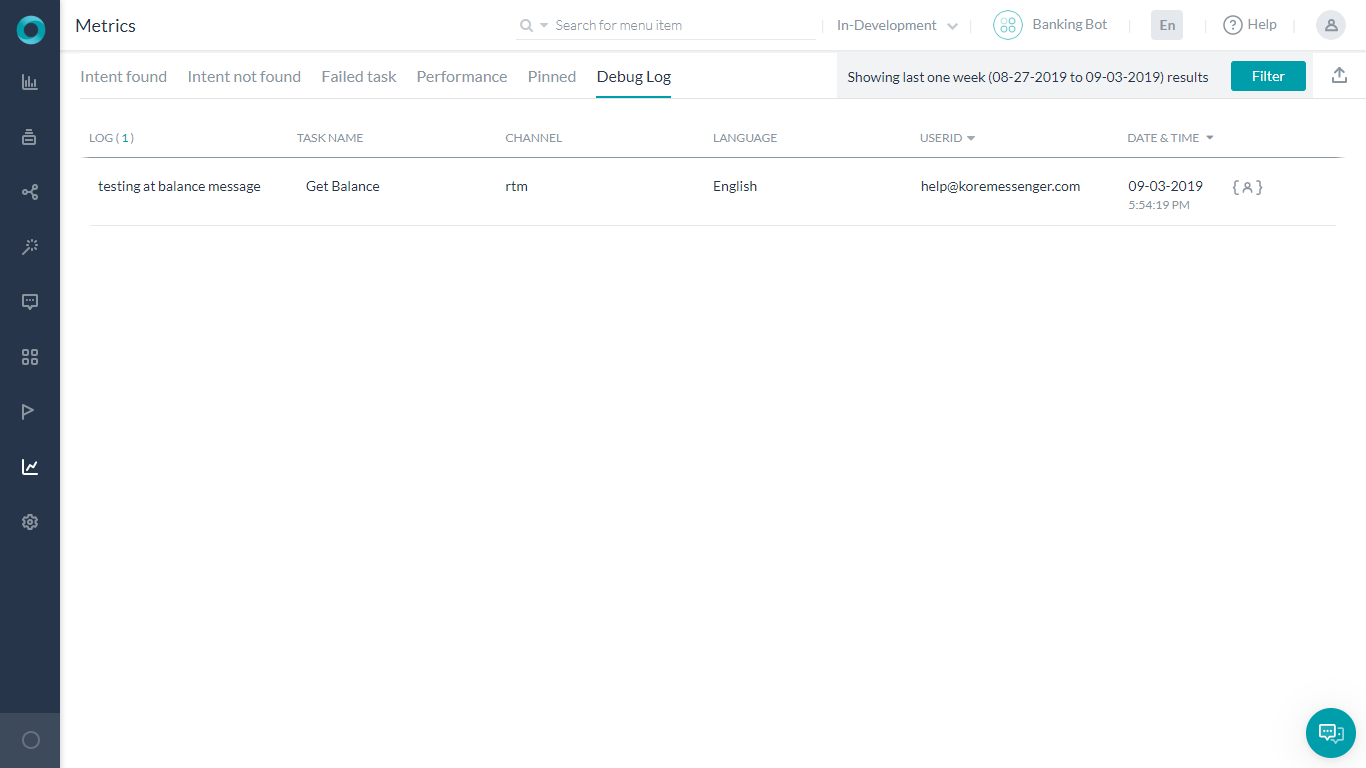 The logs will include the user conversation from across all channels. You can use them for bot analysis especially in case of failures during user interaction.

For universal bots, the debug statements from the universal and linked bots will be included in the logs.

Post v7.2 release, the debug logs will include the error messages related to BotKit, like, when the platform could not reach the BotKit or when the BotKit did not acknowledge the message sent by the platform. The message would include the details like the <endpoint>, <error code>, and <response time>.

The platform imposes restrictions on the number of log statements retained per bot. The limit is a combination of volume and period:

You can export the data present in Bot Analyze page to a CSV file by clicking the Export icon on the top right corner of the page.

Once you click the icon, the export process starts and you can use the Status Tracker dock to track the export progress. After completion of the export, the dock shows export status and if it’s successful provides a link to download the file. 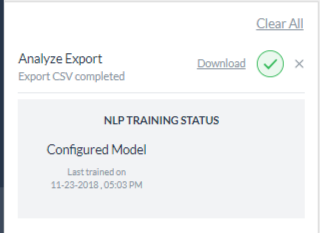 Post ver7.1 release of the platform, these records will include the Meta Tag information also.