Bot variables help you capture values that are commonly used by different tasks, nodes, and other bot elements. You can configure a bot variable as a key-value pair once in the bot settings and substitute key with value at runtime during the conversation flow. By capturing frequently used values in a single place, bot variables provide the advantages of reusability and consistency. For example, let’s say you are testing a flight booking bot using a staging endpoint. If you configure the endpoint as a variable, it helps you to call the API from several places quickly. When you want to change the staging endpoint to production while publishing the bot, it is easy. Similarly, variables can be used to externalize content for messages and prompts from the dialog flow definition. Kore.ai platform allows bot developers to define two types of variables – Environment and Content.

Environment Variables are global, reusable components which can be used in multiple places to define the bot configuration. Every Environment Variable is a key-value pair. The Variable Keys can be used at various places in the bot configuration. The platform will resolve/replace the Variable Keys with Variables Values during the conversation. Some of the typical use cases where a developer can use environment variables are:

Post the release of v8.1 of the platform, for on-prem installations, multiple value sets can be stored for these environment variables using Collections, refer here for more.

Bot building essentially requires extensive content management efforts. When it comes to multi-language bots, it also involves tedious coordination efforts between the developers and globally-distributed content authors or copyright team. Content variables enable you to overcome that by abstracting bot flow development efforts from authoring or editing the content. Using Content Variables, programmers can avoid hard-coding the bot content, such as prompts, messages, or any data presented to the user, into bot components, and instead point to specific variables in centrally managed Content Variables files for each bot language. You can export the language-specific content variable files to content editors, without exposing any bot configurations. The writers can author the content in the exported file, which you can import back into the bot.

Follow these steps to add or edit bot variables:

To add language-specific values for content variables, you first need to switch the bot language. You can switch the language by clicking the name of the currently-enabled language from the top-right corner of the bot’s page and then selecting another language as follows:

After switching the language, go to Build > Configurations > Content Variables page and click the edit icon next to the relevant variable. Replace the text in the Value field in the enabled language.

You can invoke an environment variable in plain text mode (Standard editor) using the following syntax: {{env.variableName}} If you are using it in JavaScript mode, it is env.variableName Here’s an example from a bot that uses two environment variables called botType and parameters to determine different bot environments such as development, testing, and production. The following script node in one of the bot’s tasks captures the base URL of the bot, depending on the current bot environment. 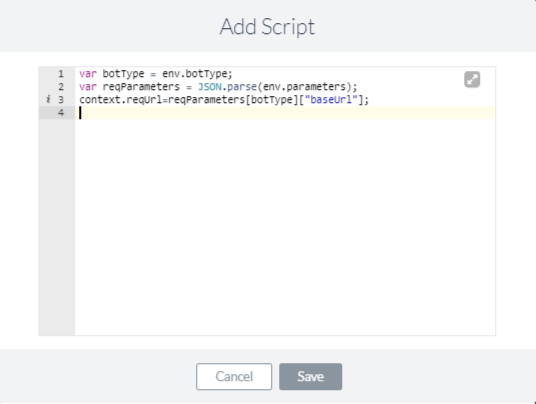 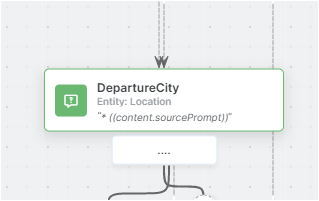 When the bot reaches this node as a part of the user interaction, the user prompt changes depending on the language of the interaction (provided you entered the respective variable values for all the enabled languages).

You can import and export bot variables between bots.

The Bot Variable file contains the following information, the same needs to be present in your Import file. CSV files need a header row. You are advised to refer to the Export (or backup) file and use the same format for the Import file.