The Kore.ai BotKit SDK is a set of libraries that provide you with precision control for bot interaction with users for the bots you build on Kore.ai Bots Platform.

This topic describes how the BotKit SDK is integrated with the Bots Platform, the SDK events you can use, and download and installation instructions for the BotKit SDK.

While bots can be built to help answer user queries and to perform a transaction for a user, in some cases, we may still need to switch from a bot interaction to a human agent to help the user complete the intent.

You can integrate event handling using the BotKit SDK in your Dialog task by capturing the following event types on the Bots Platform. 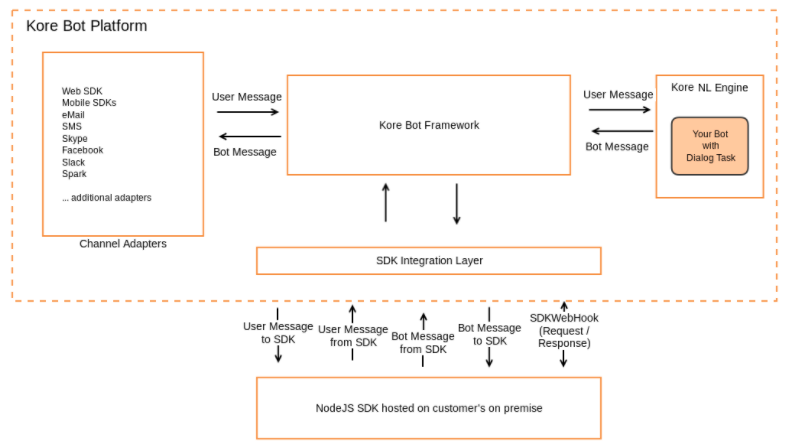 All messages, both user and Bot responses are sent to the BotKit SDK as message events.

Your BotKit SDK receives webhook events whenever the natural language processor enters the SDKWebhook node in a Bot Builder dialog task flow. In the following sequence diagram, flow for a user sending a message via a bot channel until the user response is shown. 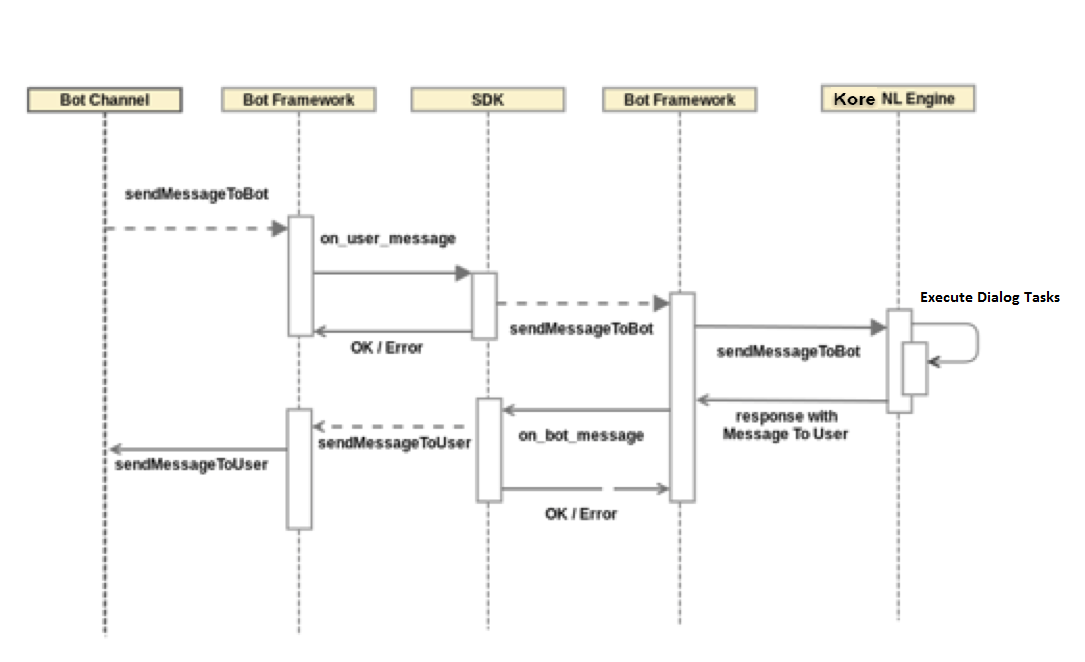 For webhook events, you should add a Webhook node in the dialog task flow whenever there is a need for server-side validation, execution of business logic, or a backend server call is required. Business logic and the response is sent on the same on_webhook event. The response is an HTTP status code 202. To send response data to the Bots Platform from the SDK, call the sdk.sendWebhookResponse() event.
Webhook events are received by the SDK when the Kore.ai NL Engine processes a Webhook node in a dialog task flow. The Kore.ai NLP engine processes each node, and then transitions to the next node based on the conditions defined. When a Webhook node is processed, a webhook call is executed and the Bots Platform sends the on_webhook event to the SDK. The following sequence diagram shows the message flow with a webhook. 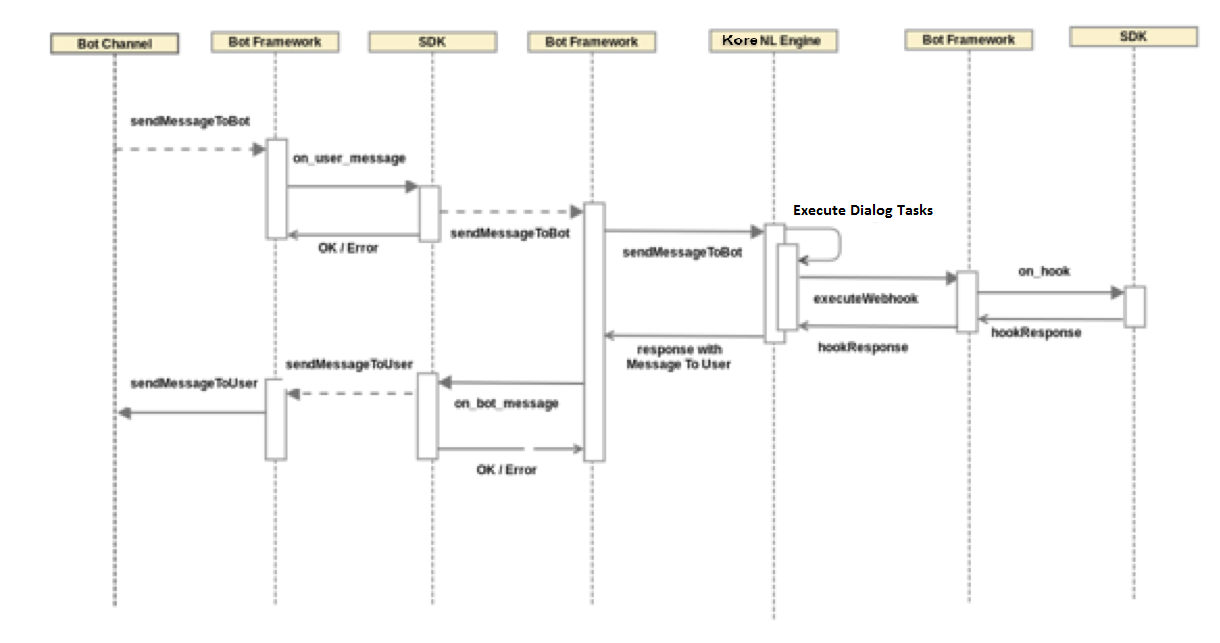 In the following sequence diagram, the Bots Platform responds to user input directly, until the Agent Transfer condition is matched. When matched, the Bots Platform connects to your BotKit SDK implementation, and then initializes the chat, for example, getting the current conversation. The BotKit SDK integrates the user and agent conversation until the Live Agent session is closed. When switching to a Live Agent, the current dialog task ends. 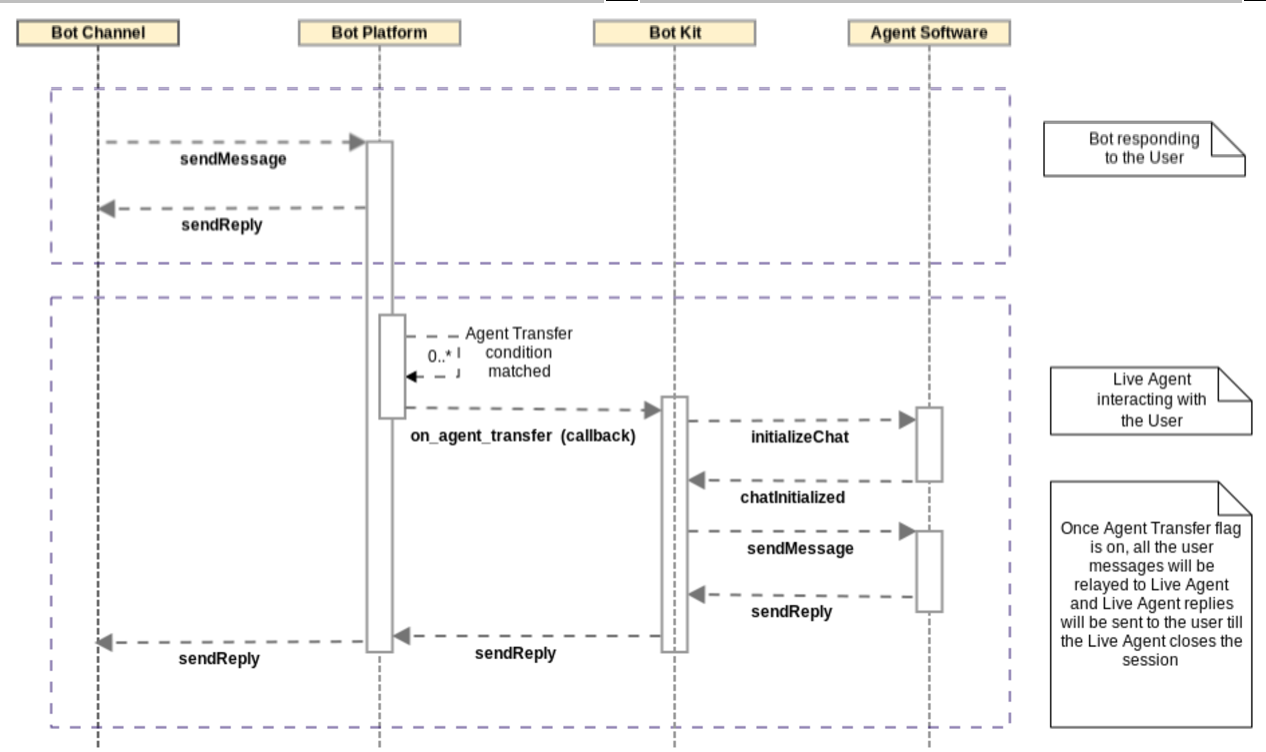 To set up an Agent Transfer in your dialog conversation flow, you will need to: