The Dialog Node lets you start a new dialog task within an existing dialog task if the user intent changes.

For example, let us consider a travel assostant that has the following three dialog tasks:

While handling a user’s intention to check for Flight Availability, your Virtual Assistant can detect a new user intention to Book a Flight. When this detection occurs, the VA can switch from checking flight availability to booking a flight, by invoking the dialog task that specifically handles the Book a Flight intent.

The key features of dialog nodes are listed below:

Setting up an dialog node in a dialog task involves the following steps:

Once you place your node on the canvas, the dialog window is displayed with the Component Properties tab selected by default.

The configurations you set up or edit in the Component Properties tab reflect in all the dialog tasks that use this node. 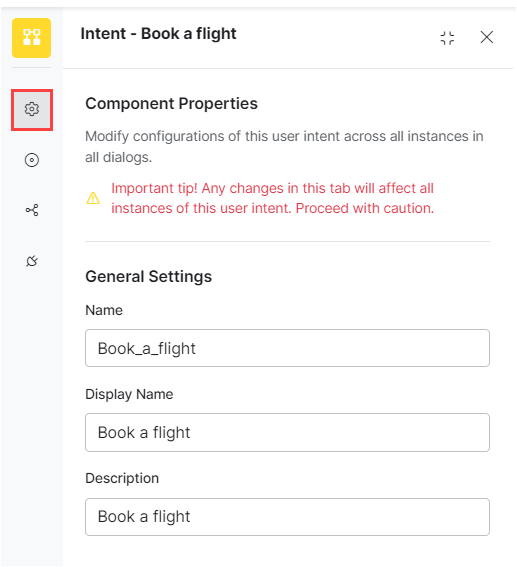 Click the Connections tab and set the transition properties to determine the node in the dialog task to execute next. You can write the conditional statements based on the values of any Entity or Context Objects in the dialog task, or you can use intents for transitions. If you have defined the Transition Property as End of Dialog, then these settings are ignored. 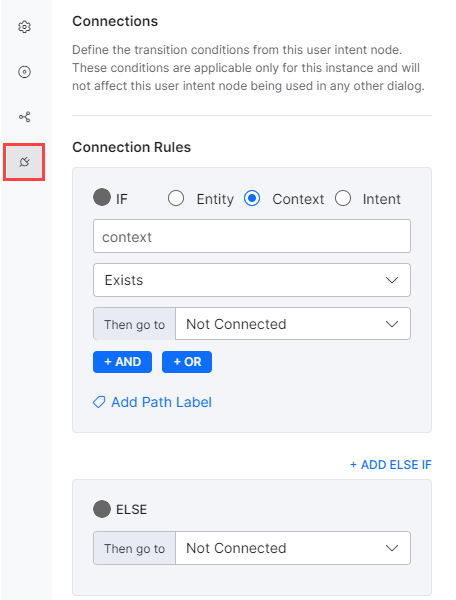 In the Entity Pre-Assignments section, you can pre-assign values from this session or node data to the entities required by the Dialog Task. Any remaining required values are handled by the sub-intent.  (see below for details) If you want to reset the values, you need to use the keyword “null”, spaces would be ignored by the platform.

In the Transition Options section, you can define the flow to be followed once the task completes. You can choose from two options:

Click Advanced Controls to set up the below-listed options:

You can pre-populate data for the destination dialog task by:

By default, entity nodes defined in the target dialog task are displayed as key/value pairs. You can then define values for associated entities or add custom keys and values as needed using session and context variables.

Transitioning from the source dialog task to the destination dialog task occurs at the runtime when the user input matches one of any linked dialog tasks. When you map more than one dialog task, you can define which dialog tasks are displayed to the end-users using conditional transitions.

You can use the mappedIntents variable in the Context object which holds the reference of the intent nodes as well as the context of the source dialog task as shown in the following JSON syntax:

For example, a link to GetEmail in the Context object can be:

The value for the postbackpayload key is generated by the Platform and is used in some channels, such as Facebook and Slack, which defines when a link or choice is made for a target dialog task.

For more information, refer to Using Session and Context Variables in Tasks and the Context Object.