Dialog Tasks are the infrastructure that the Kore.ai XO Platform provides for building conversation-based interactions between Virtual Assistants and Users, and integrating these interactions with business systems and processes.

Dialog Tasks are available within the XO Platform as follows:

The Structure of a Dialog Task

The Dialog Task development process consists in three main stages, built into the structure made available to you by the XO Platform:

The Design and Build stages work in sync, so that you can generate logical flows and integrate business processes while simultaneously working based on conversational elements. Essentially, this  allows you to see what the conversation looks like to a human user and to the VA. This is achieved using two important features, called the Conversation Designer and the Dialog Builder, respectively.

This Train section is where you can train your Virtual Assistant using a variety of parameters that will help it fulfill the Dialog Task that you are working on. Using this feature, you are engaging with Kore.ai’s NLP engines to allow your VA to maximize its potential for reaching your users’ goals. This article will not be focusing on training related aspects, therefore please see Navigating Dialog Tasks to learn more about the Train section.

The Conversation Designer and the Dialog Builder

When creating Dialog Tasks, teams can work with dedicated views. In the XO Platform, these views are referred to as the Conversation Designer and the Dialog Builder.

To create a new Dialog Task: 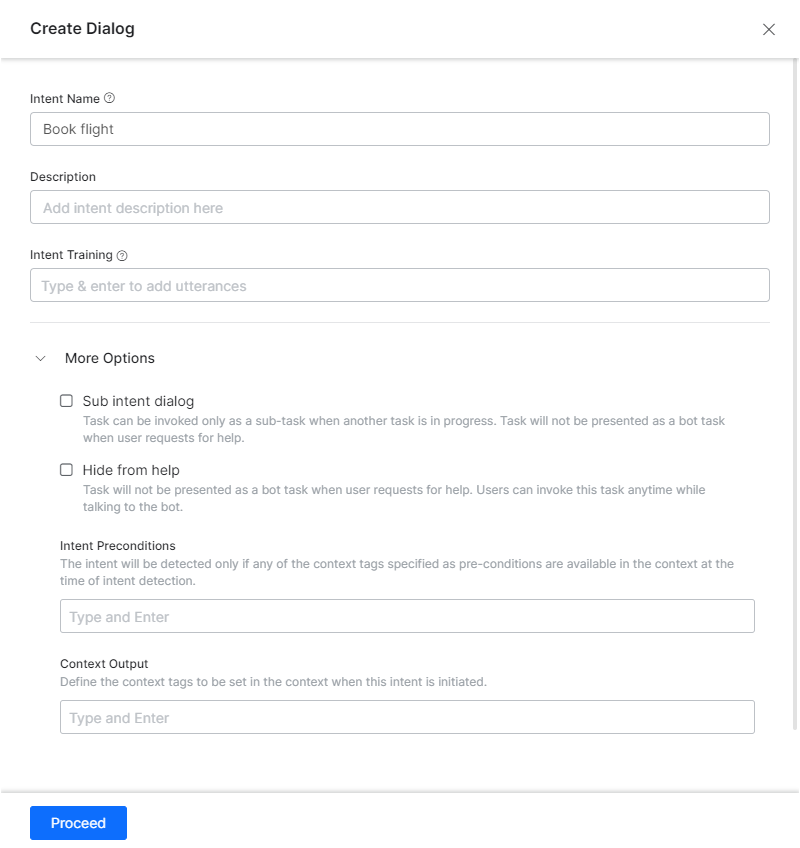 Now, let us look at the features you can use to develop conversations using the Conversation Designer, all approached based on a recommended workflow.

Once you create the Dialog Task, a Primary Intent is created by default. This is taken as the User Utterance that triggers this dialog. To configure this node, click  the More Options button next to the Intent and select Configure Properties. 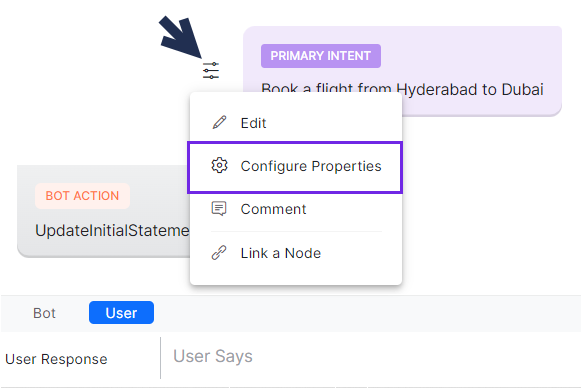 Here are the configurations you can make: 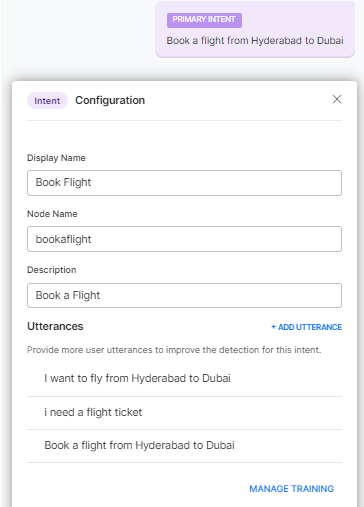 The Entity Node is created whenever Bot > Ask a Question is selected for the Bot in the Design section. 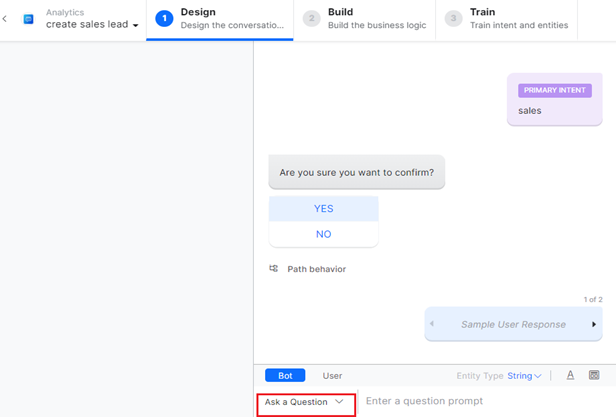 For each question you can do the following: 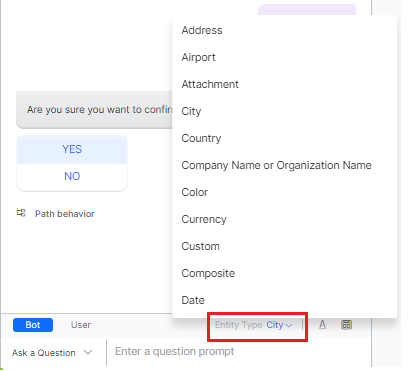 For the Button Template of the Entity Node, the Platform now provides the ability to customize the path behavior on the storyboard designer by removing/reassigning the buttons from/to the path.

To customize the path behavior, follow the steps below: 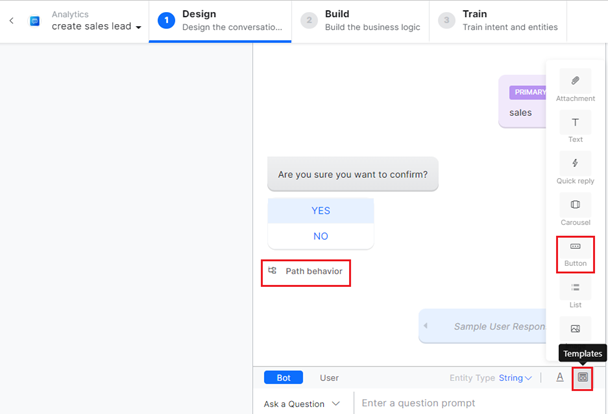 The system allows the user to do the following when designing a Button Template: 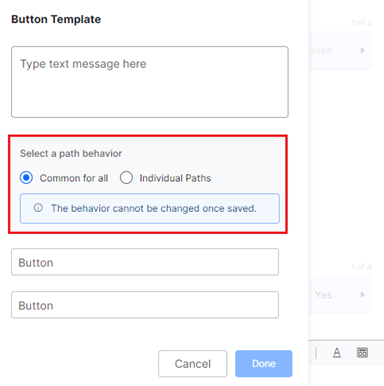 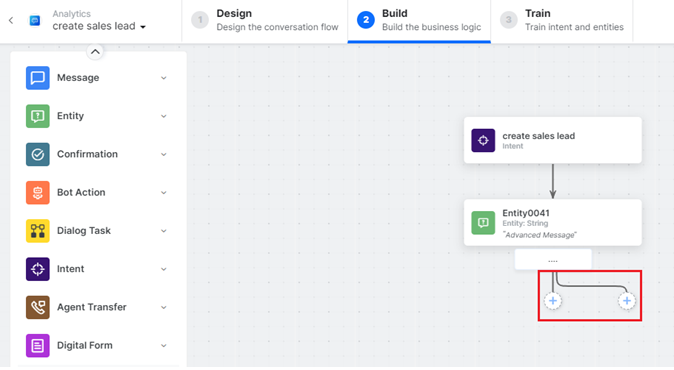 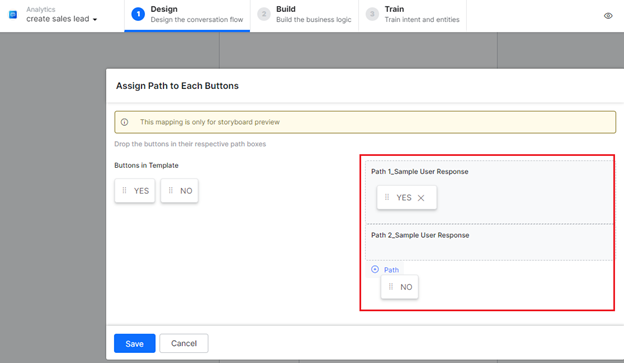 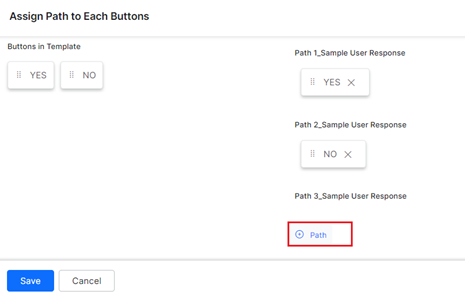 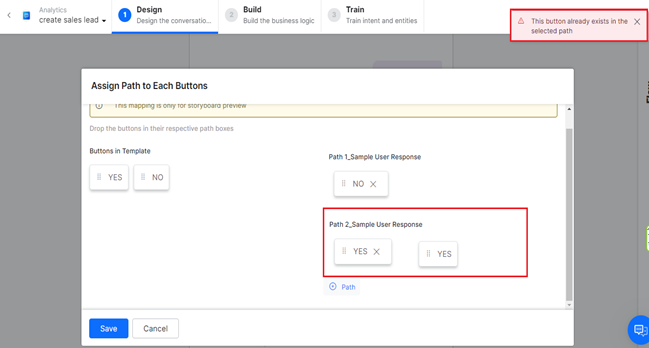 For details on Entity component properties, please refer to this link.

Bot Messages can serve one of the following purposes:

For each of the above selections, you can either use an existing node by selecting from the list or create a new node. Please see the documentation relevant to each node type for detailed information.

Here is a quick demo on how to work with Bot Messages in the Conversation Designer.

Every bot message is ideally followed by a user response. User Responses can be used to define the conversation flow by predicting the user’s reply. For example, the VA might have asked the user to confirm an input, then based on the response there would be two paths – one for affirmation and one for negation.

Work with Other Nodes

Apart from  Bot and User Messages, you can

While building the conversation, the nodes are generated with default settings. You can customize these configurations from the Conversation Designer itself or do it at a later time from the Dialog Builder.

In the following section, we see the various configurations available from the Conversation Designer for each available node type.

The entity node is created whenever Bot -> Ask Question is selected.

For each question you can:

Once added you can configure properties:

The confirmation node is created whenever Bot -> Ask Confirmation is selected, along with a Yes, No, and two other user response paths. You can delete or add more options.

For each confirmation you can: 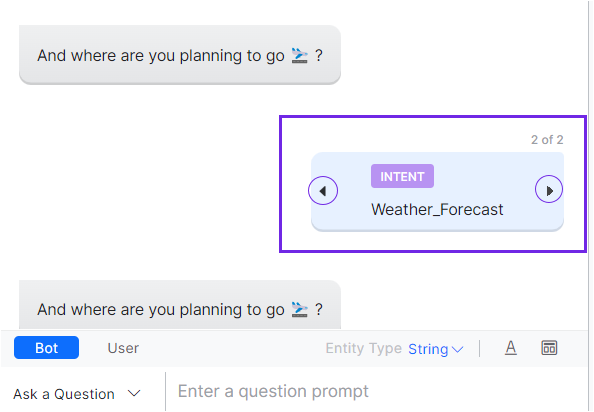 Apart from the linear flow, you can add exceptional flows to the conversation. For example, while in the Book Flight task, the  user might request the Weather Report at the destination city, or while in the Web Check In task, the user might have entered the wrong flight number three times in a row. These exceptional cases can be taken into consideration as a part of the conversation..

For each user response you can:

This allows you to trigger a different conversation flow. For example, at the prompt for the City entity within the Weather Report task, if the user says “Not now” then the conversation should end. This denotes that the user’s response is unrelated to the VAs initial question, therefore the behavior should not be the same as if the response would be the expected one. 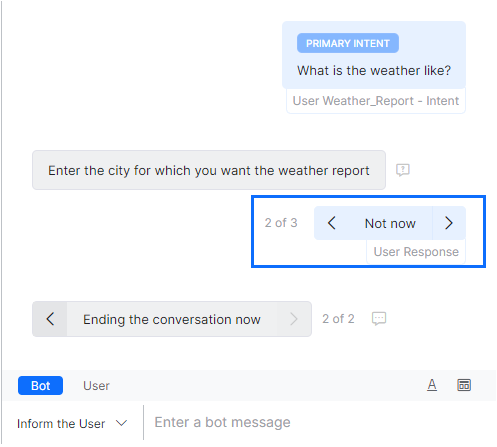 You can set a number of wrong responses that the user can provide, then define the VAs behavior when a user exceeds the set number. A standard response is set by default. 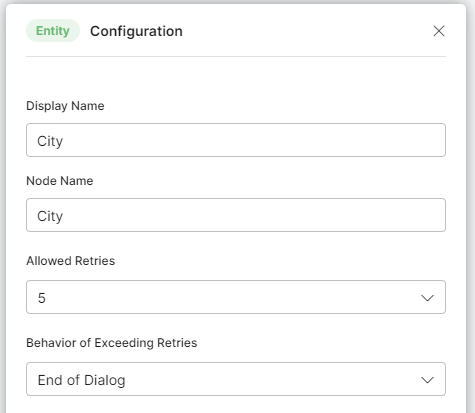 Configure the VA behavior with an interruption or a sub-intent, indicated using Ask Another Intent. For example, within the Book Flight task, the user asks for the Weather Report at the destination city using the specific intent. This option, therefore,  lets you define the VAs behavior when a user utterance deviates from the task at hand. To manage this: 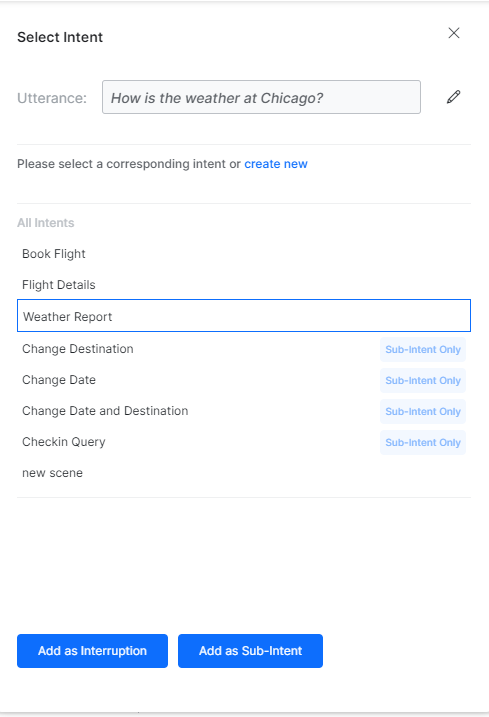