Emotion tones are critical indicators in understanding the attitudes and opinions of users interacting with Virtual Assistants. Sentiment Management allows the developer to define and trigger events based on the user’s emotion or sentiment.

Negative emotion scenarios like anger or disgust are typically considered factors that would determine a transfer of the conversation to a live agent.

The Natural Language Processing (NLP) interpreter can parse user utterances for specific words and phrases, and then provide an average tone score based on the connotation, word placement, and any added modifiers. (Click here for more on Tone Analysis)

The tone or sentiment scores are stored as context and used to drive the flow of a dialog task through conditional transition statements. You can use these scores to steer user-assistant conversations or seamlessly invoke escalation to a live agent.

You can define multiple sentiment events from under Build > Intelligence > Sentiment Management. Click New Event to define an event based on which to capture the user’s emotion.

The following parameters can be configured for a sentiment event: 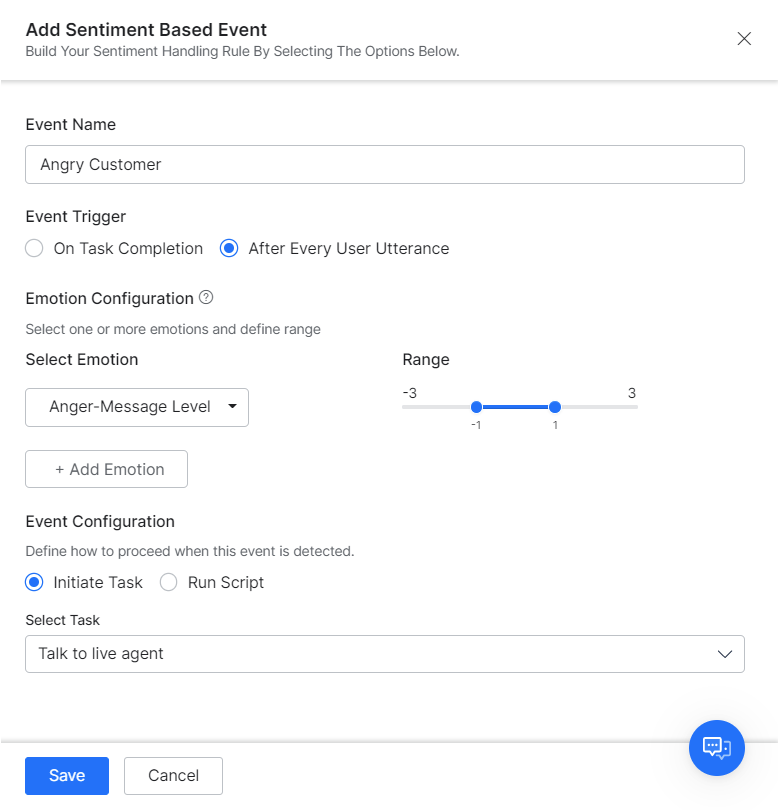 Emotion tones are continuously updated whenever a message is received from the users and as such the sentiment events are also continuously evaluated. When an event’s criteria are met, the Platform triggers the defined behavior.

Apart from the beginning of the conversation session, the Platform resets the sentiment values (i.e. tone scores) once the associated events are triggered. The reset behavior is based on the type of event trigger: