You can fine-tune intent detection for each languages enabled for your bot. To perform this action, follow the below steps:

Apart from these, under the Advanced NLP Configurations section, there are advanced settings that you can use for specific use cases and requirements.

Warning: The default settings for these configurations are ideal for most use cases. Do not change these settings unless you are fully acquainted with the functionality you are setting, as they might have a detrimental effect on the bot performance if not done properly. 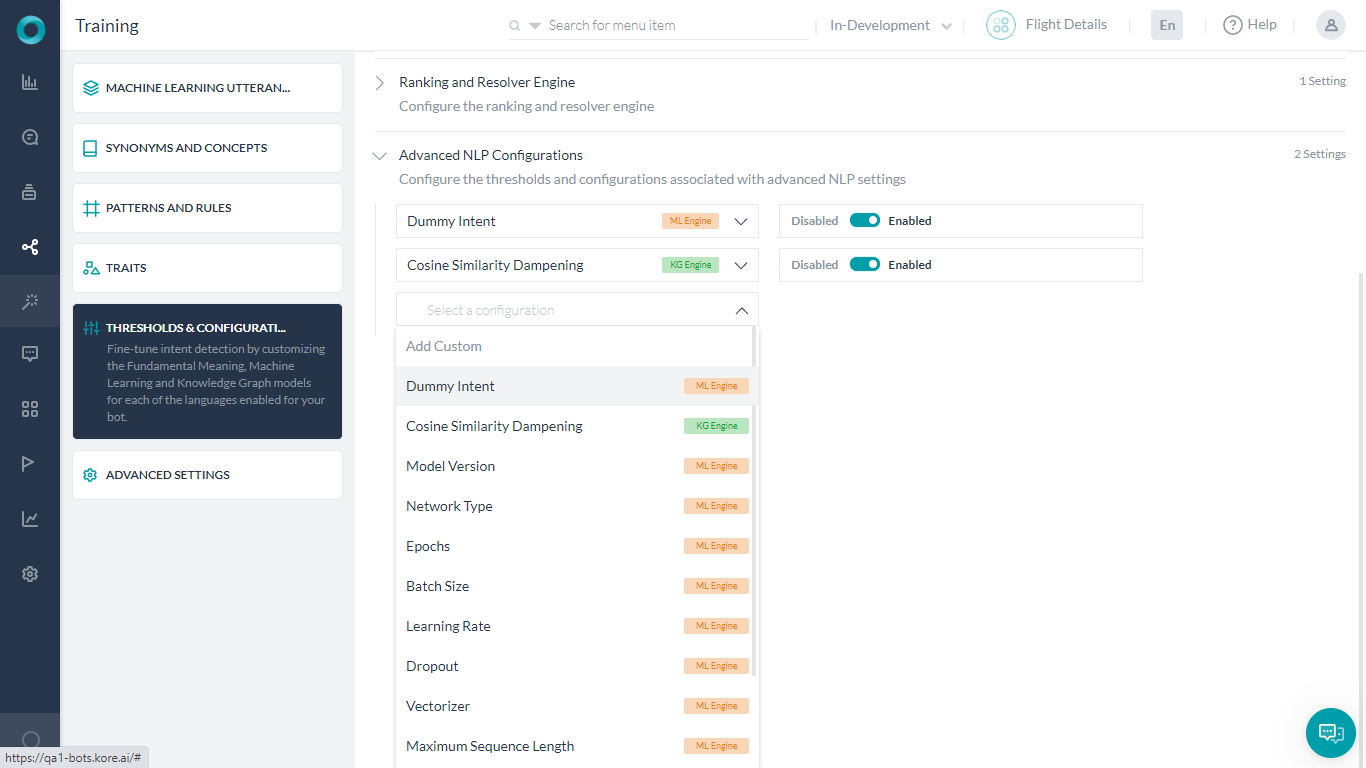 The following table gives the details of the various configurations that can be set from this section. Apart from these you can add Custom configurations, reach out to our support team to know how.

Compound words are formed when two or more words are joined together to create a new word that has an entirely new meaning. This is particularly the case with the German language, where two (or more) words are combined to form a compound, leading to an infinite amount of new compounds. For example, the components are connected with a transitional element, as the -er in Bilder | buch (picture book); or parts of the modifier can be deleted. For example, Kirch | turm (church tower), where the final -e of the lemma Kirche is deleted. Often the compound words mean something entirely different from the stem words. For example, Grunder (founder) with stem words grun | der (green|the). From an NLP perspective, it is important to understand when the NLP engines should split the words and process and when the entire word should be processed.

This setting is used to choose how the compound words should be processed. Once enabled, compound words present in the user utterance splits into their stem words and then considered for Intent Detection.

The Machine Learning (ML) engine uses the training utterances to build a model to evaluate user utterances based on its training. The ML model tries to classify user input into one of these inputs. However, when there is an out of vocabulary word, ML tries to classify that too and this might hamper intent over an entity in some cases. For example, a person’s name at the entity node should not trigger any intent.

Adding an extra None Intent ensures classifying random input to these intents in the bot. Once enabled, the ML Model is tuned to identify these none intents when a user utterance contains the words that are not used in the bot’s training. i.e., bot vocabulary.

FAQ identification is done based on word match. The problem with this approach is that a user utterance with fewer words than the corresponding trained utterance is scored poorly. This scoring causes failure in Intent Identification.

In machine learning, a hyperparameter is a parameter whose value is used to control the learning process. The hyperparameters provide you with additional customization options for your bots. The following are the ML configurations that can be customized.

You can choose the Neural Network that you want to use. This setting is moved to the Machine Learning section post v8.1. Refer here for details.

Batch size is a term used in machine learning and refers to the number of training examples utilized in one iteration. It controls the accuracy of the estimate of the error gradient when training neural networks. The batch size is a hyperparameter that controls the number of training samples to work through before the model’s internal parameters are updated.

In machine learning and statistics, the learning rate is a tuning parameter in an optimization algorithm that determines the step size at each iteration while moving toward a minimum of a loss function. It can be thought of as a parameter for controlling the weight update in the neural network based on the loss.

The term dropout refers to dropping out units (both hidden and visible) in a neural network. Simply put, dropout refers to ignoring units (i.e. neurons) during the training phase of a certain set of neurons which is chosen at random. It is a regularization technique to prevent overfitting of data.

Vectorization is a way to optimize algorithms by using vector operations for computations instead of element-by-element operations. It is used to determine the feature extraction technique on training data. It can be set to one of the following:

Embeddings Type can be set to one of the following:

Cross-validation is a resampling procedure used to evaluate machine learning models on a limited data sample. The procedure has a single parameter called k that refers to the number of groups that a given data sample is to be split into. This setting allows you to configure the K parameter. Refer here for more on cross-validation.

This option controls whether you see the Primary Question or Dialog Task name in the following scenarios:

However, fuzzy matching can produce false positives when there are words with similar spellings but different meanings. For example, possible vs. impossible or available vs. unavailable. This behavior is problematic in some cases. You can disable this option and discourage the ML engine from using this matching algorithm.

Sometimes you want the system to replace the entity values present in the user utterance with entity placeholders so that the intent detection can be improved. Note that the entities that are not resolved by the NER model would not be used for replacement, so if you enable this option we strongly urge that you annotate all the training utterances. These entities are replaced in user utterance in End-user interactions, Batch testing, Utterance testing, Conversation testing.

If the user input has multiple sentences, multiple intent calls are made, one for each sentence. This might not be an ideal situation in some cases. For example user utterance, I want to book tickets. Redirect me to Book My Show. will result in a 0.6 ML score for I want to book tickets and Redirect me to Book My Show and the total ML score of 0.6.

Disabling this configuration sends the original user input to ML for intent identification and results in a definite score like 0.99 for the above example.

There are a few safeguard rules in the R&R engine that reject a possible ML match. For example, rejection of intent when the user input contains only a verb word. But chances are that you do not want the R&R engine to apply any elimination rules and present all the qualified/winning intents to the end-users for resolving any ambiguity. Disabling this setting gives you that flexibility and NOT eliminate the intents that match the rules like single verb match (ML & FM), an entity only match with CR sentence (ML), earlier pattern match (multi-sentence scenario) (FM), or earlier definitive match (multi-sentence scenario) (All).

Enabling this feature creates multiple ML intent models for your bot. All the Primary Dialog Intents will be part of the Bot Level Intent Model. Separate Dialog Level ML Models are created for each of the other Dialog Tasks and Sub Dialog Tasks, consisting of all the sub-intents used in the respective task definition. Refer here for details.