This document explains about the concepts, terminology, and implementation of Knowledge Graph. For a use case driven approach to Knowledge Graph, refer here.

A user expresses a query in multiple ways. It is a difficult task for you to visualize and add all the alternative questions manually.

Whenever a question is asked by the user, the node names in the Knowledge Graph is checked and matched with the keywords from the user utterance. Node names, tags, and synonyms are checked and based on the score, questions are shortlisted as likely matches or intents. These shortlisted questions are then compared with the actual user utterance to come up with the best possible intent to present to the user. The response can take the form of either a simple response or execution of a dialog task.

This way, you can add a very few completely different alternative questions in the FAQ and provide tags, synonyms, and node names appropriately such that any untrained question can also be matched. The performance and intelligence of the Knowledge Graph depend on the way you train it with the appropriate node names, tags, and synonyms.

Terms or Nodes are the building blocks of an ontology and are used to define the fundamental concepts and categories of a business domain.

As shown in the image below, you can organize the terms on the left pane of the Bot Ontology window in a hierarchical order to represent the flow of information in your organization. You can create, organize, edit, and delete terms from there. There is a platform restriction of 20k maximum number of nodes and 50k number of FAQs. 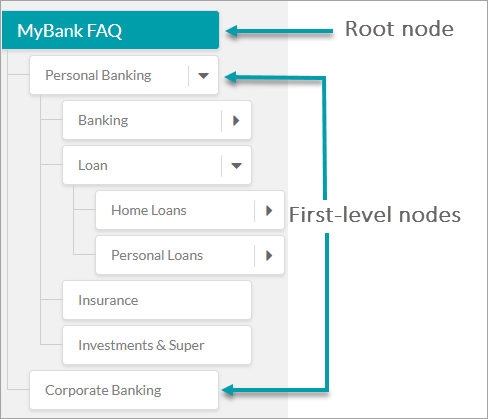 Root node forms the topmost term of your Bot Ontology. A Knowledge Graph consists of only one root node and all other nodes in the ontology become its child nodes. Root node takes the name of the bot by default, but you can change it if you want. This node is not used for node qualification or processing. The path qualification starts from first-level nodes. While it is not advisable to have FAQs directly under the root node, in case it is essential to your needs restrict the number of FAQs to a maximum of 100 at the root node.

For example, a Loan is the first-level node of a Home Loan and Personal Loan. A Personal Loan can again have two subcategory nodes: Rate and Fees, Help and Support.

Note: This hierarchical organization of nodes is for your convenience to keep related questions together. Knowledge Graph Engine does not consider any parent-child relation while evaluating the questions for a match. The hierarchy does not in any way influence the FAQ matching processing since all the nodes are considered the same way irrespective of their position in the FAQ organization.

For each term/node, you can add custom tags. Tags work exactly like terms but are not displayed in the Knowledge Graph ontology to avoid clutter. You can add synonyms and traits to tags as you do to terms.

For example, the Internet Banking node may have the following synonyms added to it: Online Banking, e-banking, Cyberbanking, and Web banking.

Post-release 7.2, you can enable the usage of Bot Synonyms inside the Knowledge Graph engine for path qualification and question matching. With this setting, you need not recreate the same set of synonyms in Bot Synonyms and KG Synonyms.

A trait is applied to multiple terms across your Bot Ontology.

A bot can respond to a given question from the user either with an execution of a Dialog Task or a FAQ.

The Knowledge Graph engine works well with the default settings. As a bot developer, you can fine-tune the KG engine performance in many ways: