Follow the below guidelines when naming your task (intent identifier)

On-Demand tasks (Actions, Dialog, Information tasks) should always contain an action verb, an object and possibly a modifier (placed before or after the object). You should map almost all actions to the form “ how + what” and complete the sentence “the goal is to”:

Alerts should always contain an object and possibly a modifier (placed before or after the object). Avoid using verbs in alert altogether. Avoid using the word “alert” in an alert name. Alerts should be mapped to the form “ what ” and complete the sentence “alert me on:”

While using synonyms is great for words used in the name, users may sometimes refer to a task using slang, metaphors, or other idiomatic expressions. For example, a task name might be ‘Get Current Weather’, but the user inputs, ‘What’s happening with today’s rain situation’. In such cases, none of the words used in the task name are used, yet the input has the same meaning. To optimize accuracy and recognition of the NLP interpreter for your bots you can create patterns.

When the NLP interpreter matches a synonym to one task or field, and a pattern to a different task or field, the pattern match is prioritized and used for recognition over the synonym match.

The following are some general guideline for creating Intent patterns:

For more information on how to add patterns, see Managing Patterns.

Synonyms need to be used when the words used to identify an intent/entity can be used interchangeably. Synonyms can be defined for both intents and entities. Each intent has a name, for example, if your intent name is Guided Search. There are many synonyms that a user might enter to start this task, such as “browse products,” “Show me makeup,” or “show me products.” As a developer, you should limit the name of a task to only two or three words. And then consider synonyms for each of those words.

Also consider misspellings, such as:

Synonyms should be ideally defined only for words defined as part of the task name. The synonyms added at the bot level are applicable for all the tasks, i.e. when a developer adds a synonym for a word in Task A, those synonyms are also used for any other tasks with the same words in the task name. For example, synonyms defined for the word browse in the Guided Search are also used for the Keyword Search. Synonyms can (and should) be used to increase the number of variations that we expect from a user requesting an intent. They supplement existing intent name with alternative wording, while not being so generic as to match everything. Remember that synonyms are unidirectional so foo=bar does not mean bar=foo.

The general guideline for Synonyms:

A match between the user input and synonym for Entity (only for List of Values and Lookup types) identification can occur in one of the following ways:

Note: Synonyms can be added to identify intents as well as entities. Entity identification is triggered only after an Intent is identified.

For more information on how to add synonyms, see Managing Synonyms.

Standard Responses are template messages that the platform uses to respond to specific situations during a conversation. Examples of these situations include resolution of ambiguous user inputs, requisition for authorization, obtaining confirmations, informing about interruptions and resumptions, and more. Standard Responses are categorized into the following:

While the platform does come with canned responses, developers are encouraged to customize these messages as well as add variations. To provide a seamless end-user experience across the conversational journey, developers may have to review each of the Standard Responses to ensure that they fit the overall persona/theme of the bot. Standard Responses can be plain text messages or can be generated through JavaScript, to compose dynamic messages and templates for supported channels. Where applicable, Standard Responses support contextual tags that help the developer in customizing the messages. For example, when user requests for what a bot can do, bot responds with a message ‘Here are the tasks I can perform for you. <list-of-tasks>’. In this example, the developer may choose to modify this message and reuse the tag <list-of-tasks>where appropriate. These tags are replaced with the actual text context during the conversation with run-time values.

For executable tasks, the intent is identified based on either the task name (used in the Fundamental Meaning model) or machine learning utterances defined for a task. This approach is appropriate when a task can be distinctively identified from other tasks, using language semantics, and statistical probabilities derived from the machine learning model. In case of FAQs, this approach may not fare well as most of the FAQs are similar to each other in terms of semantic variation, and will require additional intelligence about the domain to find a more appropriate answer. Kore.ai’s Knowledge Graph-based model provides that additional intelligence required to represent the importance of key domain terms and their relationships in identifying the user’s intent (in this case the most appropriate question). We will use the following two examples to explain the different configurations required to build a Knowledge graph

The following are a few challenges with intent recognition using a typical model based on pure machine learning and semantic rules:

In Kore knowledge graph model, having all the questions at the root level is equivalent to using a model based on term frequency and semantic rules.

Identifying key terms and their relationships is an important aspect of building ontology. Let ’s understand this using our sample Example A. Both A1 and A2 are about an application procedure, one talks about applying for a loan while other talks about applying for insurance. So, while creating an ontology we can create a parent node “apply” with two child nodes as “loan” and “insurance”. Then A1 and A2 can be assigned as child nodes of “loan” and “insurance node” respectively.

Similarly, in the case of Example B, the graph will be as below 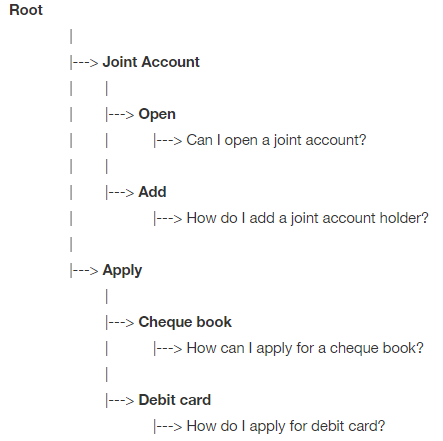 Capabilities of a Graph Engine

Following is the example of how classes work: Let’s say we create a class called Request and add request related phrases to it. If the user says ”I would like to get WebEx” and “I would like to get” is trained for the Request’ class, this FAQ is only considered across the Knowledge Graph paths where the word request is tagged with. This is a positive scenario. But if the user says ”Can you help with getting WebEx”, and we did not have similar utterances trained for the Request class, it gets tagged with ‘None’ class and this FAQ is only used with the paths where ‘the word request isn’t present. This results in a failure.

FAQs for Process for buying a product:

When a user says ”What is the process for fixing antivirus when it doesn’t work”, the engine may find that this input is similar to both A2 and B2, and may present both of them as suggestions. We know that Issue is mutually exclusive to buy, and it does not make sense present buy related FAQs at all, in this case. The opposite (matching Issue FAQs for buy related question) may be a much bigger problem. To solve this, we will create two classes, one for type issue and another for buy. Every input will be classified into either buy or issue and only the relevant questions will be used in finding an appropriate answer.

Was this article helpful to you? Yes 4 No