To make sure your bot responds to user utterances with related tasks, it’s important that you test the bot with a variety of user inputs. Evaluating a bot with a large sample of expected user inputs not only provides insights into bot responses but also gives you a great opportunity to train the bot in interpreting diverse human expressions. You can perform all the training-related activities for a bot from the Test & Train module. We will use a sample Flight Booking bot consisting of the following tasks for use as examples across the Test and Train article. 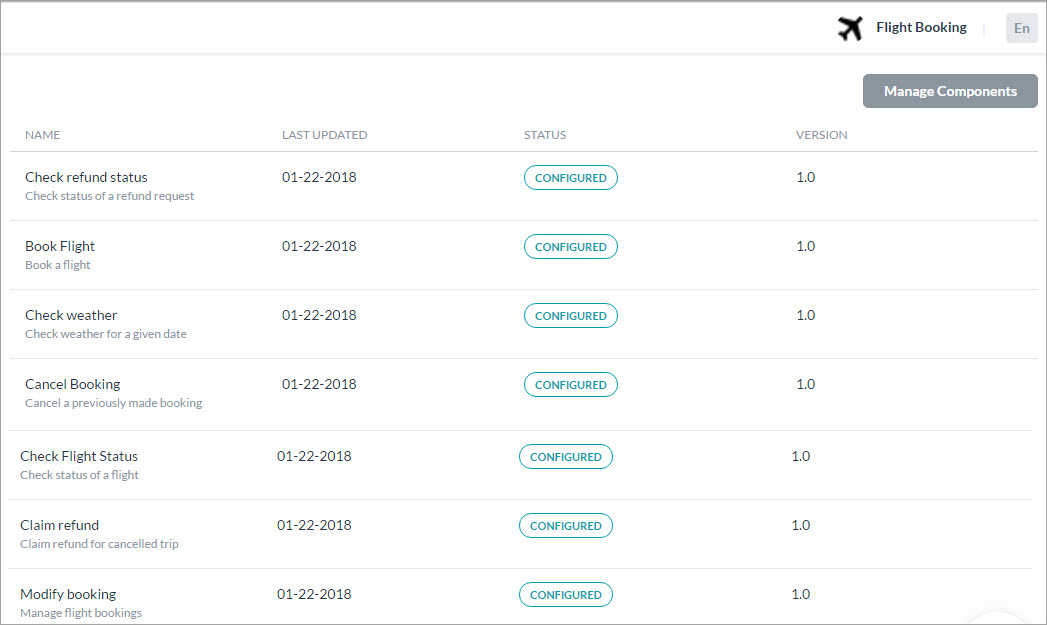 Simply put, testing a bot refers to checking if the bot can respond to a user intent with the most relevant task. Given the flexibility of language, users will use a wide range of phrases to express the same intent. For example, you can rephrase I want to Change my ticket from San Francisco to Los Angeles on Jan 1 as Please change my travel date. Can’t make it on Jan 1. The trick is to train the bot to map both of these intents with the Modify Booking task.

The result appears with a single, multiple, or no matching intents. 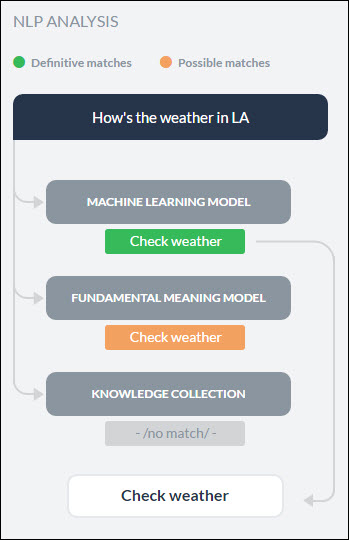 Definitive Matches get high confidence scores and are assumed to be perfect matches for the user utterance. In published bots, if user input matches with a single Definitive Match, the bot directly executes the task. If the utterances match with multiple Definitive Matches, they are sent as options for the end user to choose one. On the other hand, Possible Matches are intents that score reasonably well against the user input but do not inspire enough confidence to be termed as exact matches. Internally the system further classifies possible matches into good and unsure matches based on their scores. If the end user utterances were generating possible matches in a published bot, the bot sends these matches as “Did you mean?” suggestions for the end user.

When you test a user utterance, in addition to the matching intents you will also see an NLP Analysis box that provides a quick overview of the shortlisted intents, the NLP models using which they were shortlisted, corresponding scores, and the final winner. Under the Fundamental Meaning tab, you can see the scores of all the intents even if they aren’t shortlisted. As mentioned above, the Kore.ai NLP engine uses Machine Learning, Fundamental Meaning, and Knowledge Graph (if any) models to match intents.

If the NLP engine finds a single Definitive Match through one of the underlying models, you will see the task as the matching intent. If the test identifies more than one definitive matches, you will receive them as options to pick the right intent.

If the models shortlist more than one possible matches, all the shortlisted intents are re-scored by the Ranking and Resolver using the Fundamental Meaning model to determine the final winner. Sometimes, multiple Possible Matches secure the same score even after the rescoring in which case they are presented as multiple matches to the developer to select one. You can click the tab with the name of the learning model in the NLP Analysis box to view the intent scores.

Was this article helpful to you? Yes 6 No 4