Natural conversations often tend to go beyond linear intent resolution paths defined in the bots. Ideally, a user would allow the bot to take a user intent to its logical conclusion before initiating another, but that’s not always the case. Consider the following conversation for example: 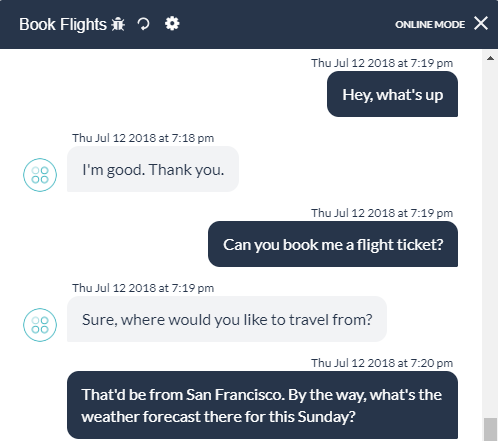 Kore.ai enables developers to handle such interruptions in intent flows by providing a whole range of options to define the task-switching experience. The Hold and Resume options, as the options are referred to as, can be set up at the bot, task, and node levels to ensure the configurations are layered to suit your various business requirements. You can also add conditional exceptions between tasks with the ability to pass contextual data between them.

The following sections describe the various Hold & Resume configurations, the hierarchy of the setups at bot, task, and node levels and also how to define conditional exceptions and pass data between them.

The Hold & Resume options allow you to select if and how a user can switch to another task and whether to get back to the previous tasks later. The platform provides several options for Hold and Resume under the following three categories:

Below is the list of available choices along with their descriptions.

Following are the options, descriptions, and examples under Allow Hold and Resume

Discard the current task and switch to new

When you select this option, the bot discards the current task and switches to a new task soon after it encounters another intent. The bot sends a message to notify the user before switching to the new task. You can customize the message by clicking Manage Response.

When you select this option, the bot discards the current task and switches to a new task soon after it encounters another intent. The bot doesn’t notify the user about the switch and the doesn’t resume the current task later.

When you select this option, the bot continues on the current task even if it encounters a new intent. It, however, adds the new intent to the Follow-up intents array. Refer to Follow-up Intents section below for more information.

When you select this option, the bot level Hold & Resume is turned off. However, the developers may override this behavior for selected tasks, linked dialogs (exceptions) or node level. Refer to the Hold and Resume Hierarchy section below for more information.

You need to define a Resume Option that the bot should take if the user decides to switch the task.

You need to select the number of tasks that you want to keep on hold at once in the On Hold Quantity field. When you select a number, the bot keeps a maximum of those many tasks on hold regardless of any option you choose above. For example, if you specify the On Hold Quantity as 1 and if a third intent comes into play, the bot wouldn’t allow the new task to be initiated regardless of Hold and Resume options. 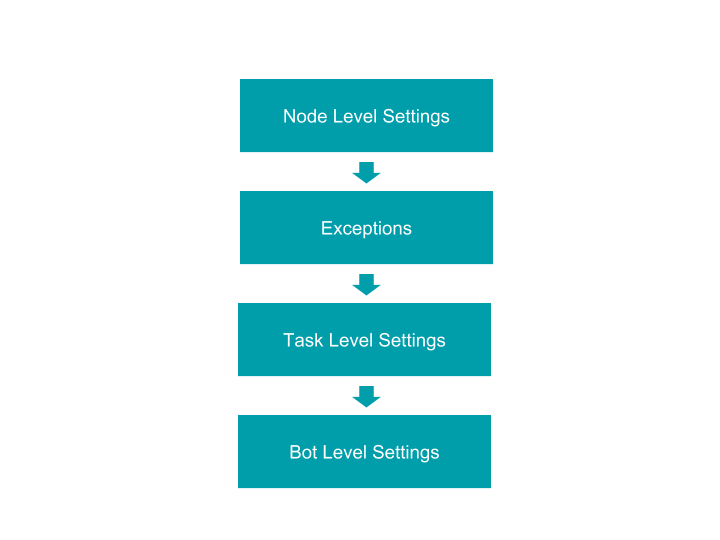 To facilitate exceptions in switching between specific tasks, you can utilize the Linked Tasks Exceptions in Dialog Tasks. When you link a Dialog task to another, you can define customized Hold and Resume properties to transition to that particular task. Additionally, you can write one or more conditional expressions using any entity values or context to ensure the Hold and Resume rules come in to effect only if those conditions are met.

As a part of defining the exceptions, you can also define entity pre-assignments and post-assignments.

Follow these steps to add exceptions to transition to a specific task:

The Manage Interruption Behavior page opens with the name of the task listed under Exceptions. You can optionally add conditional expressions within which the transition should take place.

To add entity pre-assignments, follow these steps after you enter conditional expressions for an exception:

To add entity post-assignments, follow these steps after you enter conditional expressions for an exception:

Follow-up intents refer to intents that came up in user conversations during the execution of another task, but the bot hasn’t attended to. As a part of Dialog task execution, the bot captures all unattended interruptions and make them accessible to the bot in the FollowupIntents array. However, the bot doesn’t capture Follow-up Intents if you select the Do not Hold and Resume option at the node, task, or bot level, whichever is applicable to the task flow.

You can enable the Dialog task to present all the Follow-up tasks to the user at the end of the dialog so they can choose to execute any of them. To do so, follow these steps: