The Kore.ai Bots Platform employs a multipronged approach to natural language, which combines the following two models for optimal outcomes:

With its three-fold approach, Kore.ai Bots Platform enables you to instantly build conversational bots that can respond to 70% of conversations – with no language training to get started. It automatically enables the NLP capabilities to all built-in and custom bots, and powers the way chatbots communicate, understand, and respond to a user request.

Kore.ai team has developed a hybrid NLP strategy, without outside vendors’ services. This strategy in addition to detecting and performing tasks (Fundamental Meaning) provides an ability to build FAQ bots that return static responses.

Once all the engines return scores and recommendations, Kore.ai has a ‘Ranking and Resolver’ engine that determines the winning intent based on the user utterance.

Our approach combines Fundamental Meaning (FM), Machine Learning (ML) and Knowledge Graph (KG) making it easy to build natural language capable chatbots, irrespective of the extensiveness of training provided to the bot. Enterprise developers can solve real-world dynamics by leveraging the inherent benefits of these approaches and eliminating their individual shortcomings.

Chatbot tasks can be broken down to a few words that describe what a user intends to do, usually a verb and a noun such as Find an ATM, Create an event, Search for an item, Send an alert, or Transfer fund.
Kore.ai’s NLP engine analyzes the structure of a user’s utterance to identify each word by meaning, position, conjugation, capitalization, plurality, and other factors. This analysis helps the chatbot to correctly interpret and understand the common “action” words.

Developers need to provide sample utterances for each intent (task) the bot needs to identify in order to train the machine learning model. The platform ML engine will build a model that will try to map a user utterance to one of the bot intents.

Kore.ai’s Bots Platform allows fully unsupervised machine learning to constantly expand the language capabilities of your chatbot – without human intervention. Unlike the other unsupervised models in which chatbots learn from any input – good or bad – the Kore.ai Bots Platform enables chatbots to automatically increase their vocabulary only when the chatbot successfully recognizes the intent and extracts the entities of a human’s request to complete a task.

However, we recommend keeping supervised learning enabled to monitor the bot performance and manually tune where required. Using the bots platform, developers can evaluate all interaction logs, easily change NL settings for failed scenarios, and use the learnings to retrain the bot for better conversations. Learn more about adding utterances.

The intent recognition process then uses this canonical form for matching. The original input form is still available and is referenced for certain entities like proper names where there isn’t a canonical form.
The Fundamental Meaning model considers parts of speech and inbuilt concepts to identify each word in the user utterance and relate it with the intents the bot can perform. The scoring is based on the number of words matched, total word coverage and more.

The platform also facilitates a Default Dialog option which is initiated automatically if the platform fails to identify an intent from a user utterance. Developers can modify the dialog based on the bot requirement. We also provide the ability for a human reviewer (developer, customer, support personnel, and more) to passively review every user utterance and mark the ones that need further training. Once trained, the bot recognizes the utterances based on the newly trained model.

Once Intent has been detected from a user utterance, to trigger the task bot needs additional information – Entities.

Entities are the fields, data, or words the developer designates necessary for the chatbot to complete a task like a date, time, person, location, description of an item or a product, or any number of other designations. Through the Kore.ai NLP engine, the bot identifies words from a user’s utterance to ensure the availability of fields for the matched task at hand or collects additional field data if needed.
The goal of entity extraction is to fill any holes needed to complete the task while ignoring unnecessary details. It’s a subtractive process to get just the necessary info – whether the user provides all at once, or through a guided conversation with the chatbot. The platform supports the identification and extraction of 20+ system entities out of the box. Read more about entities.

You can use the following two approaches to train the bot for identifying entities in the user utterance:

The entity training is optional, and without it, Kore.ai can still extract entities. But the training helps to guide the engine as to where to look in the input. Kore.ai still validates the value found and moves on to another location if those words are not suitable. For example, if a Number entity pattern was for * people but the user says “..for nice people,” the bot understands that “nice” is not a number and would continue searching. Know more from here.

Kore.ai Knowledge Graph goes beyond the usual practice of capturing FAQs in the form of flat question-answer pairs. Instead, the Knowledge Graph enables you to create a hierarchical structure of key domain terms and associate them with context-specific questions and their alternatives, synonyms, and Machine learning-enabled classes.

The following image provides an overview of a Knowledge Graph for a sample FAQs of a bank. Click here to learn more. 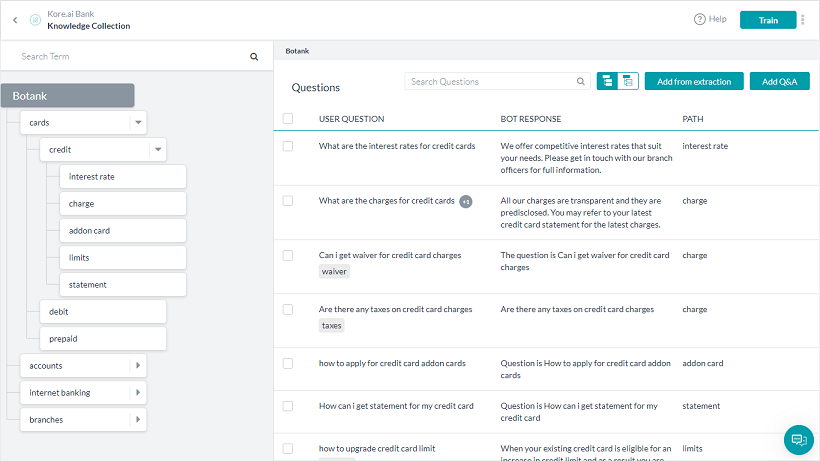