Once you have built your virtual assistant and trained it, the Kore.ai platform builds an ML model mapping user utterance with bot intents (see here for more). Once created, it is a good idea to validate the model to understand and estimate an unbiased generalization performance of the ML model.

You can choose the validation model from Training -> Machine Learning Utterances using the Validate Model drop-down and selecting the method. You will be navigated to the results page of the corresponding validation method. 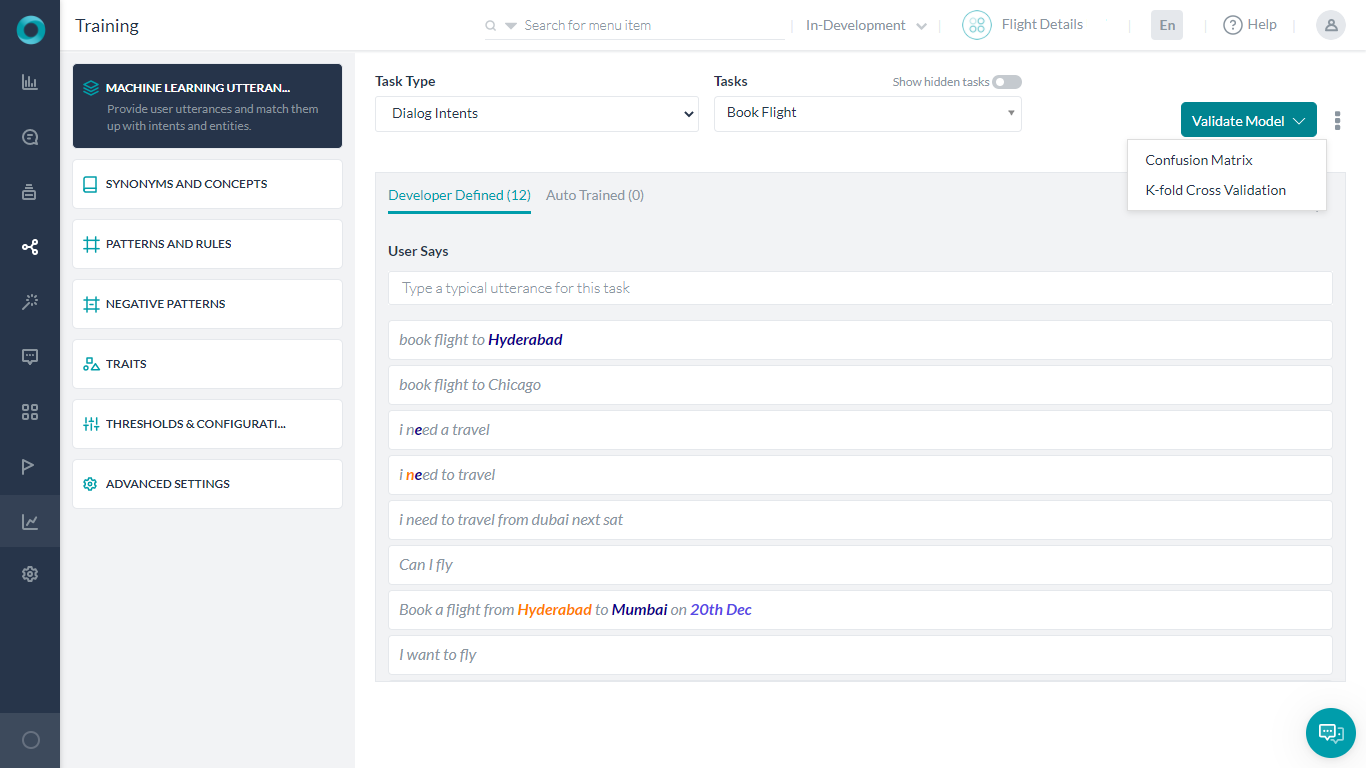 In the following sections, we will look into each of these methods in detail.

(This was introduced in ver8.0 of the platform)

Kore.ai virtual assistant platform supports K-fold cross-validation. For this, you need to configure the K-fold parameter for cross-validation from the advanced NLP configurations, see here for how.

Use the Generate button to initiate the ML training using the K-fold approach. Report would be displayed and you have the option to Regenerate the report as and when needed.

Note that the validations can be performed only when the total number of ML utterances used for training is at least 250. This number is configurable for the on-prem installation, contact our support team for details.

Following are the steps followed by the platform while performing the K-fold cross-validation:

The following metrics are provided post the K fold cross-validation:

The following information is also provided to help understand the associated metrics better:

Note that these results are more accurate and representative of the ML Model’s performance when performed on larger utterance datasets, 250 utterances at the least.

(Previously referred to as ML model)

Confusion Matrix is useful in describing the performance of a classification model (or “classifier”) on a set of test data for which the true values are known. The graph generated by the confusion matrix presents an at-a-glance view of the performance of your trained utterances against the bot tasks. The name stems from the fact that it makes it easy to see if the model is confusing utterances. 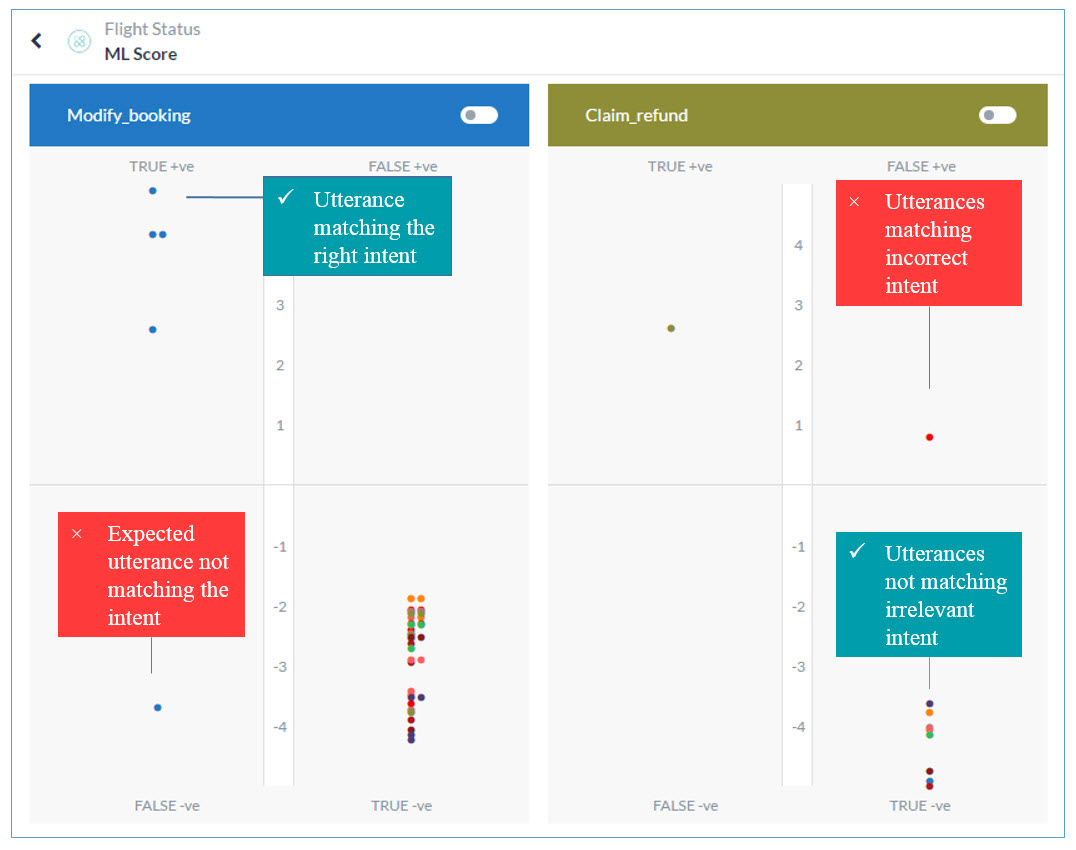 When utterances trained for an intent receive a positive confidence score for that intent, they fall into its True Positive quadrant. This quadrant represents a favorable outcome. However, the higher the utterance on the quadrant’s scale the more chances of it finding the right intent.
Note: Utterances that fall into the true positive quadrants of multiple bot tasks denote overlapping bot tasks that need to be fixed.

When utterances that are not trained for an intent receive a positive confidence score for the intent, they fall into its False Positive quadrant. This quadrant represents an unfavorable outcome. For such outcomes, the utterance, the intended bot task, and the incorrectly matching task may have to be trained for optimum results.

When utterances trained for an intent receive a negative confidence score for the intent, they fall into its False Negative quadrant. The quadrant represents an unfavorable outcome as the utterance is supposed to match with the intent. For such outcomes, the utterance, the intended bot task, and the task need to be trained for optimum outcome. Read Machine Learning to learn more. 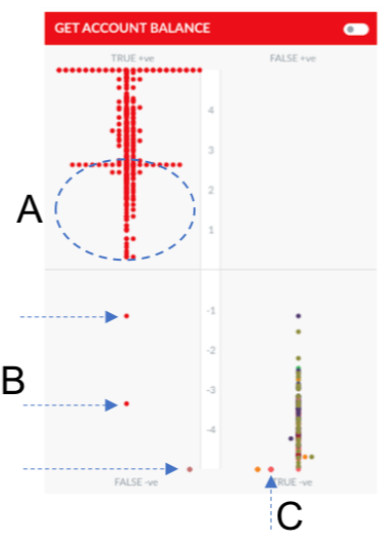 The model is trained with a lot of conflicting utterances, resulting in a scattered view of utterances. This will be considered as a bad model and will need to be re-trained with a smaller set of utterances that do not relate to multiple tasks in a bot. 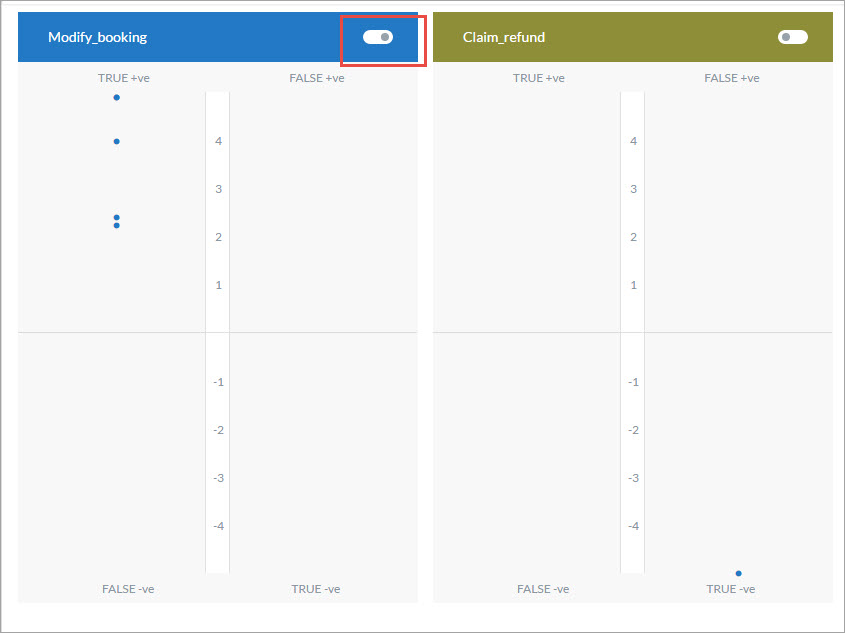 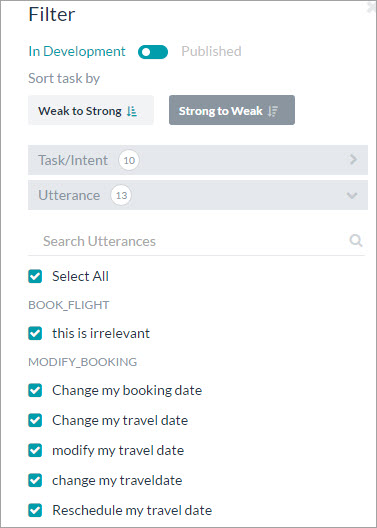 You can edit user utterances and re-assign them to other tasks to improve their scores directly from the ML Graph. To do so click on a quadrant and the Quadrant view opens with the name of the task and all the utterances related to it. 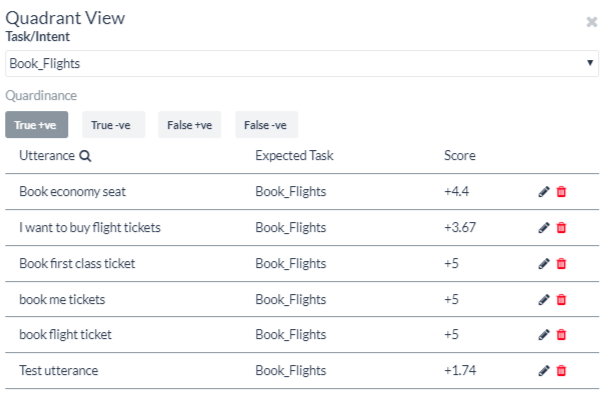 To edit an individual utterance, click the edit icon against it. The edit utterance window opens. You can make changes to the text in the Utterance field or reassign the utterance to another task using the Expected Task drop-down list. 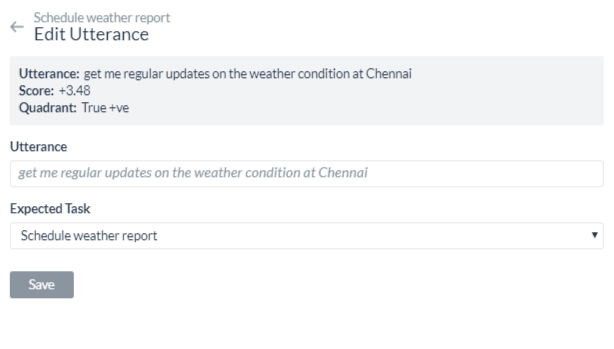 Note: You can also open this window by clicking an individual dot on the ML graph instead of the entire quadrant.
Previous
Machine Learning