This feature was released in v7.3 of the platform and is in the

Virtual Agents engage end-users primarily using a conversational interface that typically includes an exchange of a series of messages. But oftentimes, there is a need to gather information from the end-user to proceed further. Examples include providing delivery address while interacting with an eCommerce agent, details of an issue while reporting to ITSM agent, opportunity details while creating a CRM opportunity, capturing customer details to create a bank account, etc.

In a standard Dialog Task, this scenario is designed by placing a series of Entity Nodes connected back-to-back and the user is asked for values for each of these entities sequentially, which is quite tedious and frustrating. Instead, an interactive User Interface for easy and efficient capture of all the information from the user will be ideal.

Kore.ai’s Digital Form caters to such requirements by providing a range of input fields required for capturing the required details from end-users. After the users complete the form, the input is submitted to the virtual agent to proceed with the task at hand. 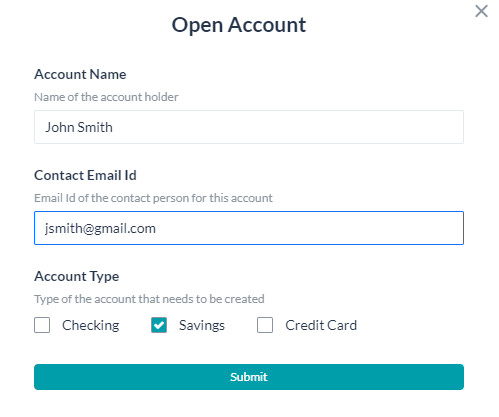 You can access Digital Forms from under the Bot Tasks menu.

Following are the steps to configuring Digital Forms: 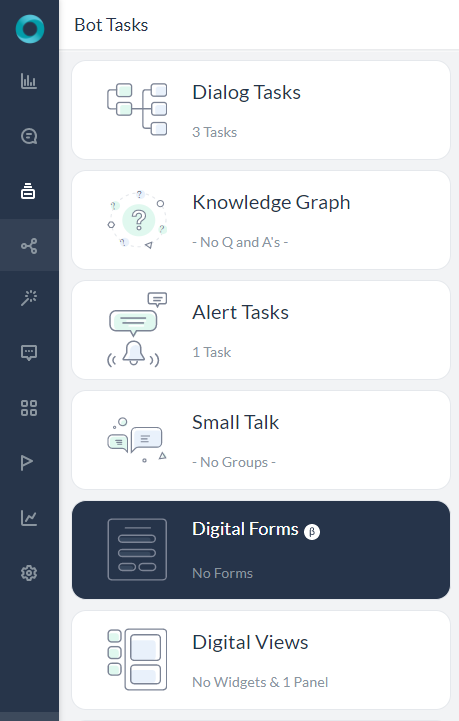 A Digital Form includes a definition and various components to capture user input. 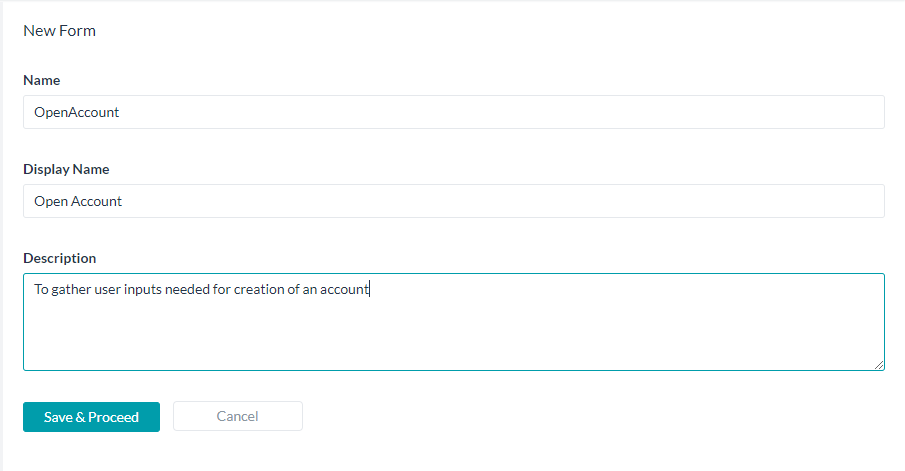 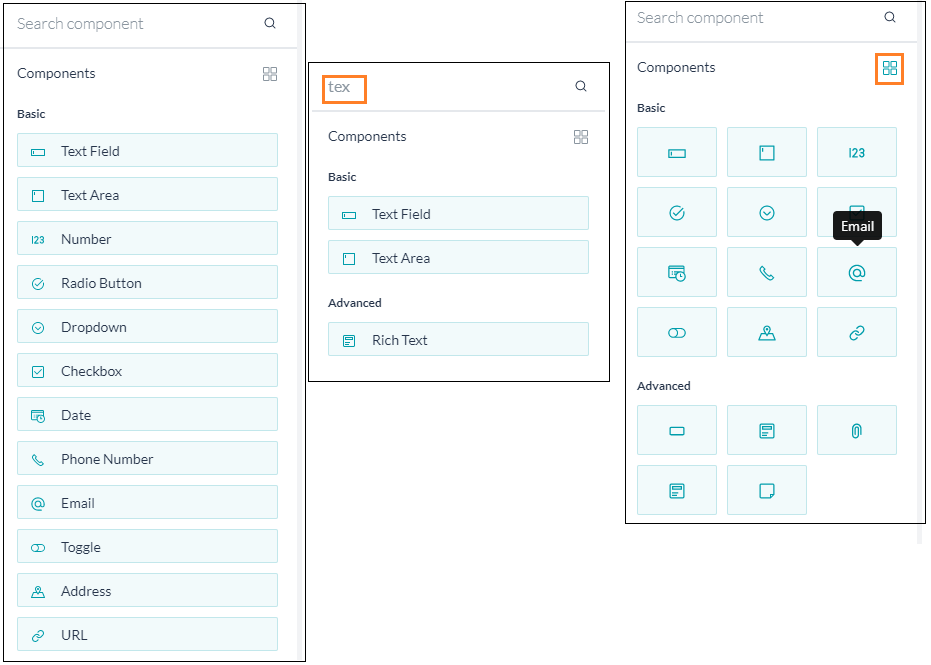 From the Forms Listing page, you can:

You can use the Edit option from the form listing to edit the form. Following actions are performed on the Form in edit mode: 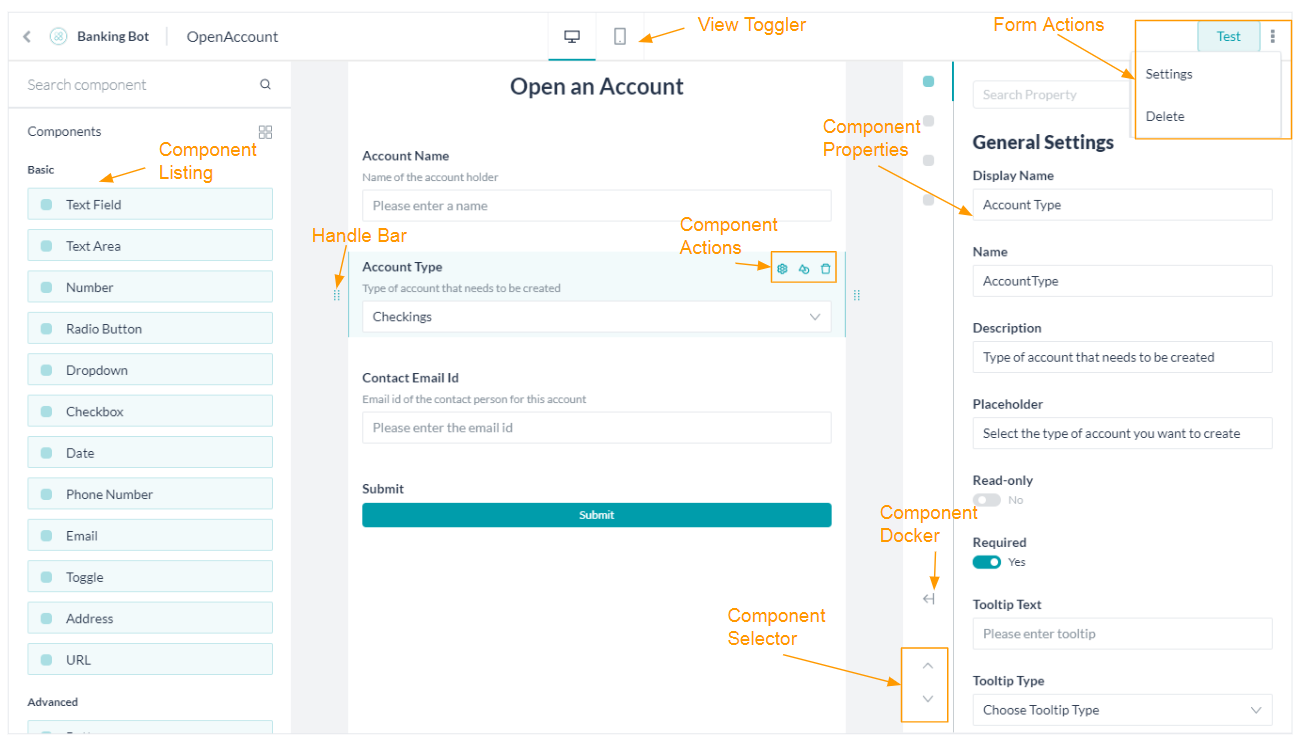 Use the Branding option to change the look and feel of the form to reflect your organization’s standards. An instant preview gives you an idea of how the form would look with the new colors and you have the option to Save or Restore Default scheme.

Test the form to see a preview 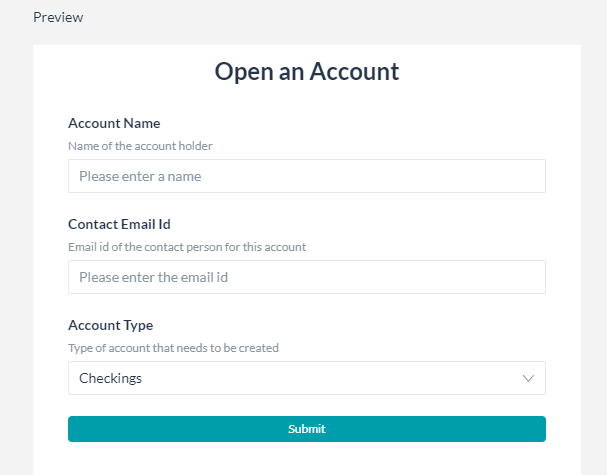 Following are the ways a Digital form can be invoked:

In the following sections, we discuss each of the above invocation processes.

Digital Forms are used inside Dialog Tasks for capturing user inputs through a Form Node.

To invoke form from a dialog task, follow the below steps:

To invoke form using Widgets and Panels, follow the below steps:

When the end-user initiates the dialog and reaches the node connecting to the Form node, the following events take place. Depending upon the experience selected at design time and the channel of invocation, the following is the flow:

When exceptions are encountered during the dialog execution with a Form Node, they are handled as follows:

Users can access the form using Panels & Widgets. The experience is the same as for the Process Flow with Form experience.

Once the form is validated and submitted, the values are available in the context variable and accessed using the following code: context.forms.<form_name>.<component_name>

The following is the experience: 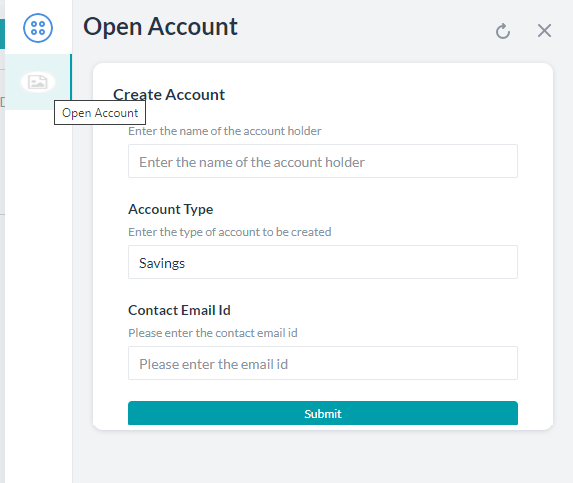 The publishing flow for a bot with Digital Forms has the following special cases:

Following is a list of available components. For details on the properties of each component, see below

The following are the properties that can be set for each of the components.

Note: Not all the properties are valid for all the components, refer to the property matrix for the mapping:

The following mapping gives the type of entities included in the sub-dialog when it is auto-generated from a Digital Form.